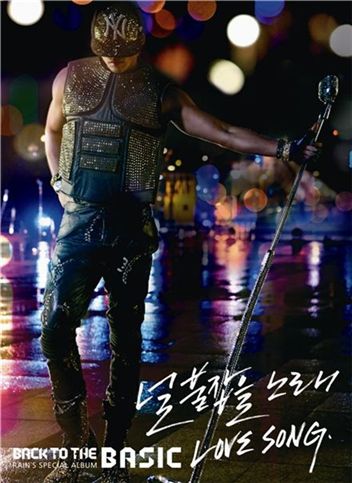 Asian superstar Rain has taken command of online and offline music charts with his latest single "Love Song," according to his agency J.Tune Entertainment on Monday.

J.Tune stated that "Love Song," the title track from Rain's special album "BACK TO THE BASIC," climbed to the No. 1 spot on numerous online weekly charts including Melon, Dosirak, Mnet, Bugs and others.

The record itself, released early last week, has ranked atop the weekly, daily and real-time charts of Hanteo, a website which computes local music album sales.

Rain made his stage comeback on several music programs during the week including Mnet's "Mnet Countdown," SBS' "Inkigayo" and MBC's "Music Central."

The singer, whose real name is Jung Ji-hoon, made his debut in 2002 with a self-titled album which gained him the title as one of the most popular entertainers in the local music industry.

He continued his path into the small screen starring in the hit series "Full House" and "Sang Doo! Let's Go To School!" and later made a name for himself in Hollywood appearing in the action film "Speed Racer" and martial arts picture "Ninja Assassin."