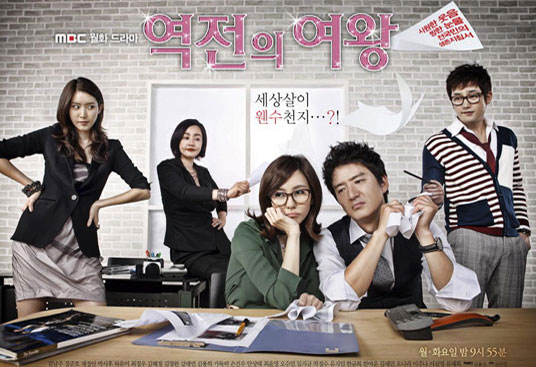 Also known as: Queen of Tears

A romantic comedy that revolves around the life of a thrifty housewife who overcomes the setbacks in her life. She once believed that marrying a man she loved would bring all the happiness she could ever want in life. However, after facing a string of obstacles just to marry her boyfriend, she finds that married life is not a bowl of cherries. Nothing in life turns out the way she imagined it would. All she wanted was a steady paycheck, a reasonable mortgage that she and her husband could afford, happy children, and a devoted husband. But life has a way of throwing curve balls at you and so it goes. Unexpected events in her life push her and her family to the brink. But after hitting the pits, she rises to emerge stronger than ever.

Hwang Tae-hee (Actress Kim Nam-joo, Ages: 32 and 37) - Team leader / Housewife "She gave up her career for love! But she decides that she must succeed in the corporate world in order to protect her family"

With her natural intelligence, she found it easy to navigate through life and avoid pitfalls. She easily gets a coveted job at big firm and earns a big salary! However, her longtime nemesis Baek Yeo-jin who went to the same high school and college as her and even got hired at the company where she works, is a constant nuisance who pokes her nose into her business! One day she finds out that her very own husband is seeing Baek Yeo-jin behind her back.

Bong Joon-soo (Actor Jeong Joon-ho, Ages: 30 and 35) - Office worker "A man who wanted to be rescued by a woman and live a cushy life! He chose the wrong queen!" He is a highly sought bachelor who grew up comfortably and was doted upon by his parents. His good looks make him popular with the girls! He falls in love with Yeo-jin at first sight and professes his undying devotion to her. But she turns him down when he asks her out and this leads him to marry Tae-hee, whom he is aware is an enemy of Yeo-jin. At first, he thought Tae-hee would make the perfect wife and their marriage would be great but five years into their marriage, he deeply regrets marrying her.

Baek Yeo-jin (Actress Chae Jeong-an, Ages: 32 and 37) - Junior manager / Team Leader People who know her call her a "fox," and she's quite clever and cunning to boot. Her mother was a mistress of a wealthy man and she was the lovechild born from that relationship. She never met her father and doesn't even know his name. This instills her with deep inferiority issues, making her extremely competitive in whatever she does. Yet, she could never beat Tae-hee in school exams.

So she got revenge by always stealing any guys that Tae-hee dated, and yet that still was not enough to quell her animosity towards Tae-hee. She even applied for a job at the company where Tae-hee was working to make her life miserable. Joon-soo turns out to be a special friend who is utterly devoted to her.

Koo Yong-shik (Actor Park Si-hoo, 33) - Son of the chairman / Vice President of Restructuring Division "Conceited and arrogant son of the chairman! He arrived at the company to cut jobs but finds himself the self-anointed leader of a bunch of losers!"

Growing up as the son of a successful businessman, he spends years going back and forth from American schools to Korean schools since he was a young kid. Finding it hard to adapt to life in America, he returns to Korea at last. But he has identity issues as he is neither a white American nor is he completely Korean in terms of his cultural tendencies. He develops a renegade attitude and creates problems due to his rebellious behavior. He has a habit of telling flat jokes to defuse awkward situations but those attempts only draw Tae-hee's ire.