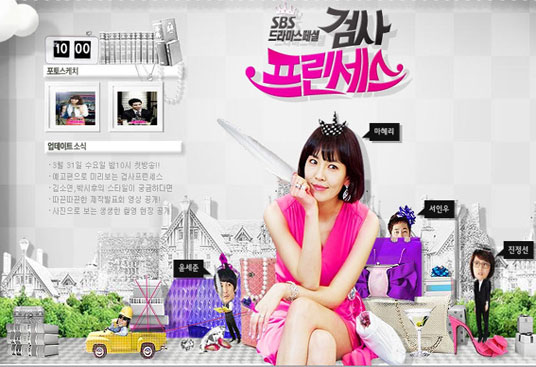 Ma Hye Ri is a woman with an excellent memory and ability to focus, which allowed her to pass the bar exam with ease. Despite her talents, she is more interested in being fashionable and dislikes hard work, so she is far from being an ideal prosecutor and has doubts about her suitability for her job. Through her conflicts with senior colleages and struggles with difficult cases, however, Hye Ri gradually matures into a brilliant prosecutor with a sense of duty and justice.

Beauty like an actress' and a body that would make a movie star cry! Passed the Bar Exam in one shot. Graduated from the Judicial Research and Training Institute with top grades. The envy of all parents in South Korea.

Raised as the precious daughter of an affluent family. Under her mother's maintenance, she studied as her mother told her to, and got good grades without any goals or personal worries, eventually entering a law college. She has an IQ of 168, plus excellent concentration and memorization skills.

Her hobbies are shopping, skincare, and body maintenance. She knows when all the new name-brand lines come out, and if she sees pretty clothes or accessories, she absolutely has to buy them. At one point, she thought her calling was fashion and transferred to Fashion Design, but her father caught her; she had to return to law in order to avoid being kicked out of the house.

Between her wealthy upbringing and hiring as a prosecutor, she has never had the chance to feel scared or altruistic, or to experience society. A flower in a greenhouse.

She has a simple, direct personality; she'd rather die than do something she doesn't want to do. She can't stand bothersome tasks, especially if they are physically tiring.

So, how is she as a Prosecutor of the Republic of Korea? Sense of duty? Sense of justice? What are those? For her, her position is just another asset that reflects her awesomeness, and all she has to do is prosecute as she was taught.

Has an unusual resumegraduated from an American university, then came to Korea to take the bar exam and became a lawyer. Runs the law firm "Haneul," which houses outsiders who can't deal with the realities of the legal profession in Korea. There are many rumors about his origins, but no one really knows his past.

Sharp appearance, sophisticated style. Recklessly confident and appropriately pompous. But sometimes, he is a trashy delinquent, and sneaky as well, but not so much that people hate him for it. His cute playfulness and laugh are his trademarks! It takes a lot of get him angry.

On the outside, he is brilliant and fairbut he has a chilling dark side.

He is tenacious, meticulous, and good at reading people's minds. He stops at nothing to win his clients' lawsuits, and is not above blackmailing people who deserve it. On the other hand, he is tender and warm toward innocent underdogs. He acts as legal aid or pro bono attorney on behalf of the powerless.

A man whose personality changes like a chameleon. Just why does In-woo hide his true self and hang around Hye-ri?

Tall and handsome, this attractive man is called "The Gregory Peck of the Prosecutor World." He is capable, cold, cynical, and harsh.

He lost his wife to cancer 3 years ago, and has a 7-year-old daughter. He is more traumatized by his wife's death than one would think. While he worked like a crazy man at the prosecutorial profession, which he found fun because of his boiling-hot sense of justice and passion, his wife supported him quietly. She allowed her disease to progress too much, and he couldn't even be at her deathbed.

The profession of prosecutor, which is so intense that he had to give up his personal lifein his heart, he carries remorse that he can't let anyone else see.

He is grateful to Prosecutor Jin and her mother for raising his daughter safely, but he hasn't noticed Jin Jeong-seon's feelings for him. He treasures her as a trustworthy junior colleague.

He is severe and cold with Hye-ri, who looks a lot like his wife but doesn't act like her at all. However, he also understands Hye-ri who, lacking passion for prosecution, treats it as just another job.

So when everyone gives up on Hye-ri, he gives her an opportunity. When that makes Hye-ri fall for him and she makes advances, he resists. But as she charges him uncalculatingly, there comes a time when he accepts her feelings.

However, the deeper his relationship with Hye-ri becomes, the more regret he feels about Jin Jeong-seon. And watching Hye-ri suffer over In-woo, he learns a truth that he wasn't able to comprehend before

She runs around as though she'll save the world all by herself. Unbeknownst to her, this has earned her the nickname "Eagle Noona [older sister]" as well as "Double Blade" -- because her speech cuts like a knife.

She became a prosecutor because her father, having lost all of his money to a con, died of a nervous disorder brought on by rage. Because of her work, she has never dreamed of marriage. Sometimes, when corruption in the prosecutor world comes to light, or a fellow prosecutor's misconduct is revealed, she fumes alone, drinking like a fish.

But Ma Hye-ri, flaunting her feminine scent, comes on the scene. As if that aura weren't enough, she points out things that are wrong with Jeong-seon's appearance and even talks back?! A one-way ticket to Jeong-seon's hit list.

No need for experience; that thing needs to be fired right away! Being a prosecutor when she is not at all prosecutor material...Jeong-seon will not accept this.

Besides, Hye-ri shamelessly makes moves on Yoon Se-joon, the object of Jeong-seon's secret affection, and steals him away little by littleJeong-seon, who has no dating experience, is about to die because of Hye-ri.

All she's done is admire Yoon Se-joon from afar. She doesn't know what to do except wait for his wounds to heal. She half-forces her mother, using threats and pleas, to baby-sit Yoon's daughter Bin, and looks after Bin providently.

She's inept at expressing emotions, as well as bumbling, timid, and naively unaware of social norms. When will she finally be able to express her feelings for Se-joon

Korean, but was adopted into the U.S. as an infant. Has extraordinary endurance and courage from having to live as an Asian in American society. Met In-woo when he came to live with an adoptive father and enrolled in her middle school.

The day she found out about In-woo's heartbreak, which was even deeper than her own heartbreak over being abandoned by her biological parents, she held out her hand to him: "I'll be your sister" So they became like brother and sister, like family. When they got into a fight with some Mexicans because of racism issues, they defended each other to the death.

When In-woo decides to leave for Korea to do the work that he's dreamed of all his life, she follows In-woo to help him.