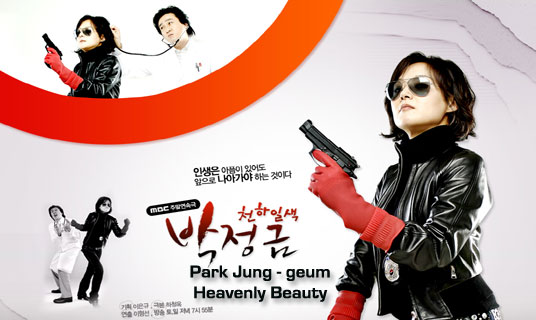 In life, you need to move on and roll with the punches!

Unlike previous detective dramas that cast a young, glamorous female detective as the heroine supported with a flimsy story plot, "Park Jung-geum, Heavenly Beauty" is a story about a middle-aged female detective who is pushy, strong-willed and even shameless at times. And the main story is interwoven with the family problems she faces at home that will resonate with female viewers and give them satisfaction when the heroine turns the tables around on her enemies.

When women grow older, they feel that being a good wife and wise mother is all that is expected from them. But older women want more out of life than that. They crave for love. They wish a romantic man would whisk them off their feet.

With dreams of romance and passionate love, most desperate housewives give up on ever finding true love from another man. But that doesn't mean they don't hang on a sliver of hope for something to spark their lives.

As divorces become as common as marriages nowadays, children are the ones who suffer the most when a married couple splits. This story has been come up in order to give hope and encouragement to divorced parents, who, from my experience, often get emotional whenever they talk about their children, with a message that there will be light at the end of the long, dark tunnel as long as they don't stop loving their children. The working mom is the main character mom who also happens to have the stressful, demanding job of a detective, as the main heroine to show the enormous burden that single moms endure in their daily lives.

The heroine Park Jung-geum holds back her tears to look brave in front of her son who suffered immensely after her divorce from her ex-husband. She also comes around to understanding her parents and reconciles with her dad who she always believed to be the source of all her misery in this touching drama about a family. This drama will center on this family to warm the hearts of viewers.

Starting as a traffic cop, she rose through the ranks to become a detective who handles gang-related crimes Just go through the motions! Do you want to win a damn medal or what! I've got a kid so I can't go to any dangerous places! You should just arrest all the pretty girls in the streets and lock 'em up! Park Jung-geum is having another long day at work. She's not tackling gangsters to get a good workout. She just wants to arrest the criminals who know no boundaries as they lunge at her with a knife or swing a metal rod at her head ... But she's not a strong, burly detective. She's a middle-aged female detective. She gets beaten up and stabbed at in her line of work. Some days, she'll walk home with a limp after breaking a leg. When there's a special sale going for fish, she'll have to run right out again with a limp to put food on the table. Watching every penny she spends, she has to worry about paying her monthly credit card bills without paying any late fees and come up with the money for her son's cram schools. Then there are the endless house chores she has to do that include sorting recyclable cans, throwing out leftover food into the food trash bin, doing the dishes, and ironing shirts. On top of that she has to worry about rising housing costs. She attends the weekly apartment cooperative meetings so that she won't have to pay the $5 fine for missing any of them. She's a typical lady you'll see every day when you leave your house in the morning.

She'll rub her bloodied hands on her jeans to wipe of the blood. After catching a bad guy, she'll knock her head back and make small talk interspersed with spontaneous laughs. She's a typical middle-aged woman alright.

He is not authoritarian or takes himself seriously like most other doctors. Armed with a jolly humor, he's a compassionate doctor I'm sorry for being so cool! When he was a kid in elementary school, he ran around with a runny nose and gave a stench because of his poor hygiene. But he became a doctor and later meets Jung-geum, a childhood friend. His mother passed away when he was still in elementary school and then his father died when he was in middle school. His older brother Yong-doo protected him from the mean side of the adult world and paid for his college and medical school tuition. So he has a bright personality and grew into a man full of confidence. But his supreme confidence has also given him delusions that all the women in the world like him. He has a mischievous side and a sex appeal that oozes effortlessly. When he has no patients in the waiting room, he'll sneak some time looking at his reflection in the mirror and pretend to be Rhett Butler in Gone with the Wind. His hobby is riding motorcycles, fly fishing, and other cool things. His nickname is conceited loaf man, which the nurses came up with because he acts so conceited.

He has a sad past but he empathizes with the plight of other people He was abandoned by his parents and became an adoptee. His foster parents are respected people in society but they are not warmhearted at all. They never hid the fact that Gyeong-soo was their adopted child and they ingrained into him the teaching that he must watch his manners because an adoptee like him is more apt to receive criticism from others. They urged him to become a contributing member to society. Thanks to their influence, Gyeong-soo became a lawyer with impeccable manners. But for some reason he never felt at home in his foster parent's house and that left him constantly adrift. He decides to get engaged to Yoo-ra because that is what his foster parents want. He was taught not to draw scorn from anyone for behaving inappropriately so that is why he appears to be distant and sensitive over quaint matters but in reality, he was born with a compassionate heart. He is not used to being on the receiving end of compassionate acts so he finds it very awkward in those times. He would never hurt anyone intentionally.

She ran a wedding dress shop once but now she is unemployed I don't know. I was in love with you then! I love you. I love you. I love you so much! She is the daughter of Lady Sa, who brought her with her when she married Jung-geum's dad. She cohabitated with all kinds of men and never cared whether they were married or not. Legally she is single. She’ll put on a big scene if she doesn't get what she wants. She is so blunt to the point where it seems that she is burning bridges down so that none of her ex-boyfriends would ever approach her. She is a lowlife who looks glamorous. Self-centered to a fault, she always acts like she is superior. But although she is full of these personality flaws, no man could resist her advances once they lay their eyes on her exotic beauty. Even the girls grudgingly admit that she is quite beautiful with a nice figure. A femme fatale.... At first she was unwilling to get engaged to Gyeong-soo because she thought he was eager to marry her for her money. But she gradually learns more about him and finds out that he is different from the other men she had dated so far. One day, she becomes desperate for love for the first time in her life.