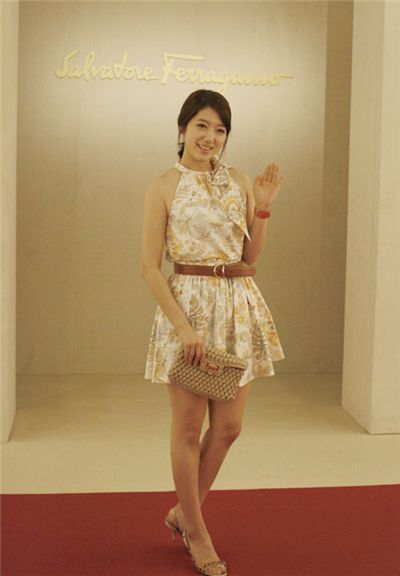 According to a press release by 4HIM, Park, was invited as the only Korean VIP guest to the launching of "Salvatore Ferragamo Spring/Summer Collection" last Thursday.

Dressed in S/S collection's brand new mini-dress, Park was greeted by Michele Norsa, the CEO of Ferragamo from Italy as well as chiefs of other Ferragamo branches in Asian countries to watch the show and take part in the dinner party.

An official at Ferragamo was quoted as saying that Park was chosen as a VIP due to her high popularity in Singapore after appearing in hit TV series "He's Beautiful" (SBS, 2009) and romantic film "Cyrano Agency" (2010).

The statement added Park's Taiwanese drama "Hayate the Combat Butler" (????) is also expected to be aired in Singapore soon.

"This is only my first time visiting Singapore yet everyone welcomes me so warmly that I'm simply overwhelmed. Thank you so much for the wonderful experience, I would like to return to Singapore when I get the chance to," Park was quoted as saying in the statement as she was readily welcomed and followed by hundreds of her fans and media personnel from the airport.

She has recently been cast as the leads in an upcoming MBC drama tentatively titled "Festival" alongside actor Jung Yong-hwa. 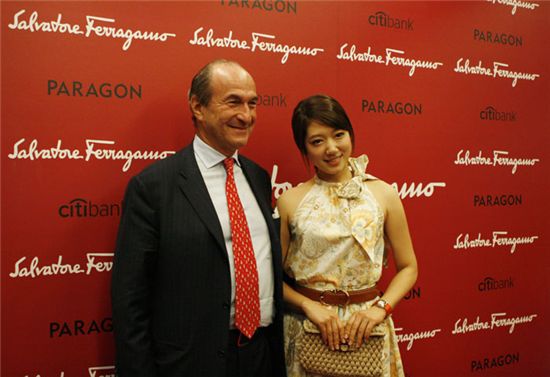