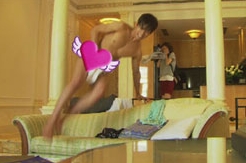 'Please regard us like a comic' is what the new SBS drama "Paradise Farm" stresses from the very beginning. The way colorful numbers hover above the head of the main characters participating in an auction and how the screen "cracks" like a window in certain scenes make that point even clearer. By the time one reaches the part where a pink heart that floats across the screen to cover the lower area of Han Dong-ju's (Shim Chang-min) body who has just stepped out of his shower, the viewer is given no other choice but to go with the flow. Dajee's (Lee Yeon-hee) overreaction as she struggles to stand up after falling on horse dung, too looked a bit contrived. And this all makes sense given what the director said earlier: "No need to take it seriously, just enjoy it as light, happy drama."

However a comic book-like plot cannot be an excuse for having a weak structure. The acting of the two main leads of the story combined -- Shim Chang-min who is acting for the first time and Lee Yeon-hee who has yet to earn favorable reviews for her acting -- were unstable as expected. But the reason it is hard to find fault with their acting alone is because the drama hardly gives time for the viewers to see what their characters are about. The story being centered too much on the plot makes it that much harder for actors -- especially those with weak acting -- to appear convincing enough in the eyes of viewers. That is why although one can presume there is a story to why Dong-ju and Dajee have such different attitudes toward each other when they meet up in Australia for the first time in six years, it is hard to sympathize with them nor follow the story.

It is easy to criticize Lee Yeon-hee's monologue when she first meets Yunho (Joo Sang-wook) which seemed as if she was talking aside the stage. But when seeing her repeating it, mumbling her troubles aloud for the whole world to know when they meet the second time, makes one doubt the looseness of original scenario that tries to find an easy way out to carry on with the plot. The story which should cover up for how it lacks when it comes to acting, is only making that void look bigger instead.