On the set of MTV's "B2ST Almighty" 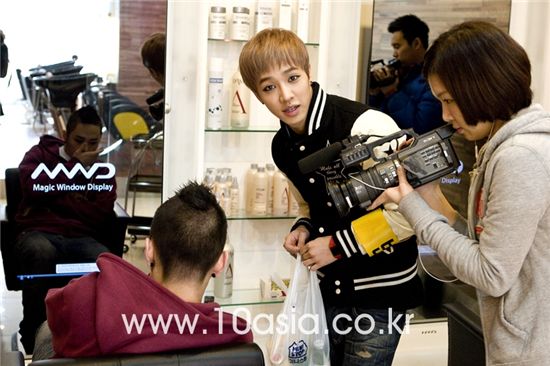 "B2ST Almighty" - Tell Me Your Wish

"Hello. BEAST manager Lee Gi-kwang speaking." This is a real situation. It is student Se-ho, no, Lee Ki-gwang, who takes the phone calls to mediate press coverages on set and delivers the news to the members. One does not need to look far to find out who the first star of MTV "B2ST Almighty" is, the show which grants wishes of Korean viewers. It is none other than the manager of the group, who does everything with them every single day. He has become busier with the increasing popularity of BEAST and in order to make his wish come true, which is "to rest," the members take turns by the hour doing their manager's work.

Temporary manager Ki-gwang panics at the sight of reporters on set, saying "Ha, this is an unexpected situation," but looks for his group's members one by one, asking for their cooperation. Even when the other members are more focused on the snacks delivered by the temporary manager than his immediate request. Hyun-seung can't even take his eyes off the television screen which is playing Usher's music video. He must have already seen it several hundreds of times but for him, who follows Usher's dance moves while sitting down, all the time that he is not on stage is all rehearsal time.

Before BEAST gets on the subway to get to MTV's office to tape the show, members flock around the next temporary manager Hyun-seung. When they pour him with demands, "Just one cookie!", Hyun-seung ever so cautiously chooses to give them [Korean snack] "Kan-cho" just because it sounds similar to his nickname "Ran-cho." Yo-sup, who has just realized that this situation will air on TV, throws in a remark, "'Let's buy a copy of [monthly essay publication] 'Good Thoughts'! They have great essays." The group's leader Du-jun keeps the members disciplined by saying, "You can't make loud noises on the subway." But it is out of the question to think that they would kept quiet just like that. Watching the six members start singing an unidentifiable song together which goes "Ni-na-ni-na-ni-gorilla-da," they look no different than little children who are out on a school field trip.

The members' excitement reaches a peak back stage in their waiting room as the time for their performance nears. Despite rebukes of being called "Amazon animals" by other members, Hyun-seung and Dong-woon keep shouting "I'm waiting you! You!" and Jun-hyung, the last one to take on the role of manager, is busy going here and there by himself. Before they go on stage for rehearsals, the director demands that Yong Jun-hyung wear an armband signifying that he is in charge of the group, and the facial expression of the proud fashionista stiffens for a moment. But our brother Yong Jun-hyung, being ever the man that he is, holds out his arm with a determined look on his face. "Nothing I can do about it. Put it on." So how did he and the members pull off the performance? If you are curious about the entire story, wait until April 10. For that is the day when MTV's "B2ST Almighty" premieres on television.