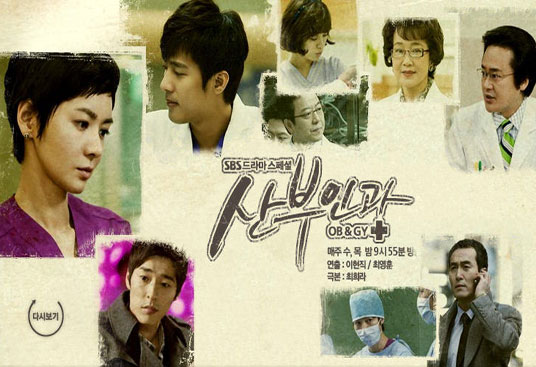 In one sentence: A competent obstetrics and gynecology surgeon learns about life, grows as a person and finds new love after experiencing demotion, pregnancy and meeting patients with unfortunate life stories.

Most people go to the hospital when they fall sick or get into accident. But an OB/GYN office is a place that many women must inevitably visit when they go though a certain process in life -- namely pregnancy and giving birth. The most ordinary and most dramatic aspects to an OB/GYN office was revealed during a 15-minute highlight video shown at the press conference for SBS TV series "OB and GY", held January 27 at Konkuk University Hospital.

OB/GYN doctor Seo Hye-young (played by Jang Seo-hee), who is known for her surgical skills and for being a workaholic, finds out that she is pregnant while she is having an affair with married co-worker Yoon Seo-jin (played by Jeong Ho-bin). To make matters worse, she gets fired and demoted to a hospital in the rural countryside. Hye-young starts working with fertility doctor - and former classmate - Wang Jae-seok (played by Seo Ji-seok) and good-natured pediatrician Lee Sang-shik (played by Ko Joo-won). OB/GYN resident Ahn Kyung-woo (played by Song Joong-ki) breaks up with his OB/GYN nurse girlfriend Kim Young-mi (played by Lee Young-eun) when he decides it is hard to make money after getting married. But "OB and GY" is not just about romance at the hospital. Each episode carries two or three sub-plots -- stories about the patients - and deals with the predicament of OB/GYN doctors who "must take responsibility for two lives, the mother and the fetus, at the same time". Director Lee Hyeon-jik explained his purpose of making the drama by saying, "First, I wanted to show men how much pain women go through and risk their lives to give birth. Secondly, I wanted to inform young women who avoid getting check-ups at the OB/GYN, that the sooner they go see an OB/GYN doctor, the sooner they'll get better. Third, I wanted to portray the difficult, just and respectable a job OB/GYN doctors have, having to deal with two lives at the same time".

The drama deplicts the life of a talented OB-GYN doctor, Seo Hye Young, and the difficulties she faces with her profession. Her love life takes an unexpected turn when shes pursued by two younger men: one is a pediatrician at her hospital, Lee Sang Shik, and the other is her friend, Wang Jae Suk.