My Too Perfect Sons 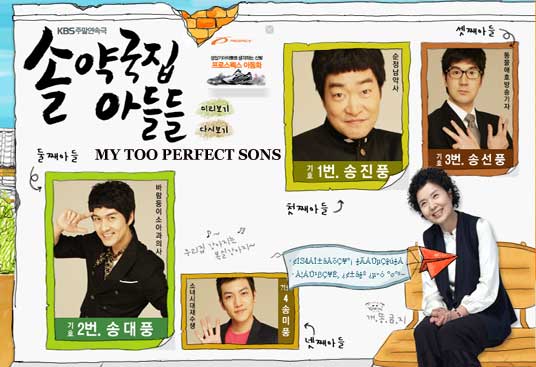 Also known as: The Sons of Sol Pharmacy House

Family drama about the four sons of the pharmacy house. This is a story about a mother, her four unmarried sons, and their neighbors. The mother thinks she's got exceptionally charming and handsome sons ever. However, there is quite a difference between what the neighbors are thinking. The neighbors think that it would be hard for the sons to get married, because each of them has fatal flaws. Let's take a look at their struggle to get married.

Song Jin Poong is the eldest of four sons and works hard to earn money to support his family. He is also a man who cannot forget his first love. His mother, Ok Hee, wants him to get married because he is already 38 years old. Ok Hee believes that her sons are great catches and any woman would be lucky enough to marry them, however, their neighbors feel differently as each son has an unique problem.

My Too Perfect Sons Trailer