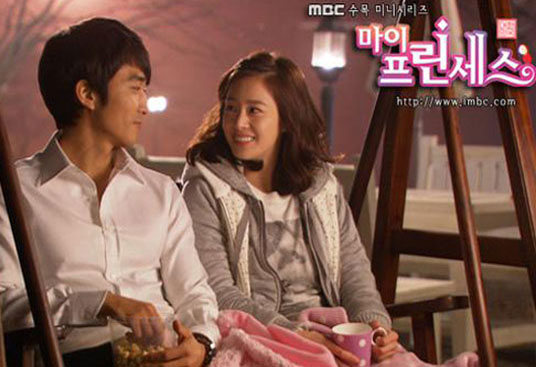 An ordinary college student, Lee Seol, finds out she's a princess. The grandson of Daehan Group, Park Hae Young, is put in charge of educating Seol on proper etiquette.

When casting news of a new drama called My Princess (2011) came out, it could not be helped that a most sarcastic reaction and laughing bout duked it out trying to burst out from me. But seriously, are the producers insane to let two of the most infamously bad actors anchor the same project? Who else can it be but Song Seung Heon and Kim Tae Hee, well known for their lack of acting skills despite years in the industry with innumerable opportunities to hone and improve upon them. At the same time, because they are also just as well known for their blessed physicality which has garnered them a much more positive response, they have been able to coast by on them. In the past, they were each fortunately paired with good to exceptionally talented co-stars, thereby minimizing the collateral damage they leave behind in their earnest efforts to emote any believable, uncringe worthy emotions. But now, on their own, it waits to be seen if their looks can save them.

My Princess will tell how Kim's character literally becomes a princess. This will certainly add an additional layer to the mounting demands of suspension of disbelief the producers are requiring as Korea does not have a monarchy last checked. Will there be another caveat at the beginning similar to Goong's (2006) I'm frightened to watch this, but simultaneously compelled to see how it pains out. My Princess is slated for a January release on MBC Wednesday-Thursday evenings taking over Home Sweet Home's timeslot.