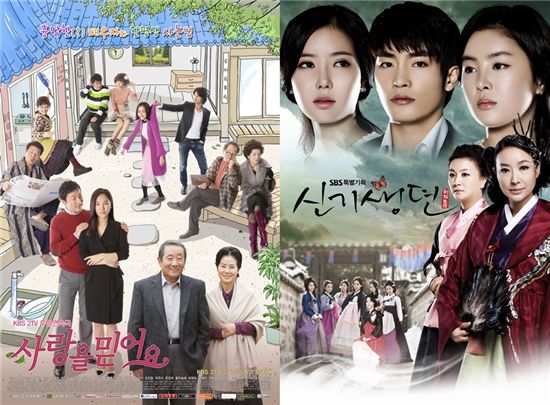 
KBS weekend series "My Love My Family" ruled the TV chart for the sixth week in-a-row, according to the polls by two media research companies on Monday.

Family drama "My Love My Family," which describes the troubled love situations of four siblings living close to each other, posted average viewership ratings of 24.7 percent on Total National Multimedia Statistics' (TNmS) survey and 26.1 percent on AGB Nielsen Media Research's (AGB) chart on the fourth week of June.

Starring Lee Jae-ryeong, Park Moo-mi, Lee Pil-mo, Hwangwoo Seul-hye and others, the drama went up in ratings on both charts by one to three percentage points in average from last time.

On TNmS' chart, KBS variety show "Happy Sunday" arrived on the No. 2 spot after jumping two steps from the previous week.

The weekly show which is famous for its comic camping trip segment "Two Days and One Night" in particular, scored a viewership rating of 20 percent this time, nearly a three percent increase from the previous week.

The No. 3 spot on TNmS' chart was claimed by SBS weekend series "New Gisaeng Story" which got pushed back a step after yielding an average viewership rating of 19.9 percent on the latest chart.

"New Gisaeng Story" starring Lim Soo-hyang, Sung Hoon and Han Hye-rin, tells about love, romance and family secrets surrounding the lives of three young people against the backdrop of the traditional house of courtesans while "Twinkle Twinkle" starring Kim Hyun-joo, Lee Yu-ri and Kim Seok-hoon, portrays the rivalry between two women who got switched at birth and end up competing with each other for family fortune and the love of one man.