My Girlfriend is a Gumiho 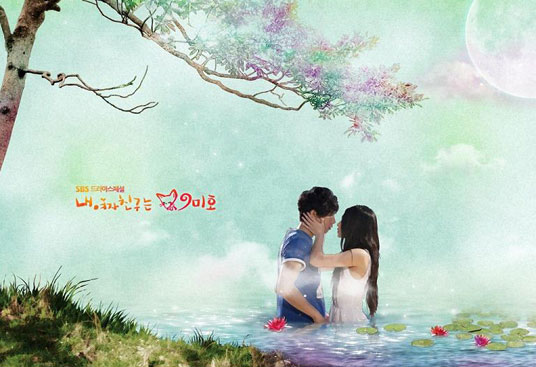 Also known as: My Girlfriend is a Nine-Tailed Fox

The makers of the new drama "My Girlfriend is a Gumiho" (working title) would want a yes for an answer, as he is matching up with actress Sin Min-ah and aiming to create yet another successful romantic drama series for television viewers.

"My Girlfriend is a Gumiho" is like a gift box: It has funny, heartwarming and even heartbreaking elements all in one shot. We are all sure the series will be able to offer a bit of happiness to viewers", Boo Seong-cheol, the producer, said during a press conference last week at SBS headquarters, in Mok-dong, northern Seoul.

The storyline is simple: Cha Dae-wung, played by Lee, accidently wakes up the legendary gumiho, or the nine-tailed fox, that seeks revenge and lives on human flesh and livers. Surprisingly, the fox/human is nothing like the legendary character that appears in ghost stories, but a cute and clueless girl who prefers hanwoo, homegrown cattle beef, and is searching for true love with a man who will love her despite her haunting condition. Lee, not knowing what to do with the gorgeous "monster", helps her along her journey of soul searching and looking for love and discovers his true feelings for her.

"The gumiho in the drama is so innocent and pure that she seems a bit dumb. It was hard for me to act because it was a character I have never experienced", Sin said.

It will take a bit more than effort to perfectly bring out the role assigned to her, as Sin is better known as an advertisement star here, complete with the looks, body and charms. She may have appeared in various dramas and films for the past 12 years since her debut, but it's hard to pinpoint a memorable character or work that establishes and highlights her acting career. Amid the ongoing worries and criticism, the 26-year-old admitted her lack of acting experience on both the small and big screens.

"I may have been criticized for not being fully devoted to my acting because of the numerous commercials I worked on, but that's something I will have to develop and prove to viewers in the future. I hope to break that stereotype of me through `My Girlfriend is a Gumiho"', she said.

Fellow actor Lee will also have to break from his usual image of being the ultimate good guy in order to transform himself into a true actor.

He started out as a singer in 2004, but he was given the chance to prove his versatility through the popular drama "Shining Inheritance" (2009, SBS). From there, he became one of the most sought after commercial star and hosts, appearing in various ads for home appliances, beverages and clothing brands and hit shows such as "One Night Two Days" (KBS) and "Strong Heart" (SBS).

"I was not the one and only person who made the popular shows popular. The most important thing was teamwork and I think I was lucky in that area. I think this drama will also be a success as we all have great teamwork", he said.

Teamwork will be needed, indeed, but will Lee be able to bring something new to the table aside from his signature smile and smooth emceeing, and try to work on his overall acting for a change?

"I believe I'm not the only one who wants to discover a new image of me, something completely different from the old `Lee'. My previous work for `Shining Inheritance' was a bit more serious than this one and I will do my best to bring out a more comical and cute character this time", Lee added.

Written by the writers for hit soaps such as "My Girl" (2005, SBS) and "Fantastic Couple" (2006, MBC) Hong Jeong-eun and Hong Mi-ran, the drama will hopefully reach to the top as a trendy and fun soap with catchy characters.

Who lost both of his parents at a very young age and has been with his grandfather and aunt for more than 20 years. He is not interested in going to college; instead, he wants to be an actor. When his grandfather tries to take him to a boarding school, Dae-woong escapes and eventually gets lost. A woman's voice tells him to draw nine tails on a drawing of a fox at a Buddhist temple and in doing so he accidentally releases it. He meets a girl who informs him that she is the fox he released. He finds out that she is a gumiho (later called Mi ho) so he ends up trying to keep her happy (mostly by buying her meat) and hide the fact that she is a gumiho from everyone else. Later, Dae-woong falls in love with Mi ho.

A legendary nine-tailed fox that has been stuck inside a painting for 500 years. Mi ho dreams of becoming a human and has always wanted to do things humans do. However, when people heard rumors that gumihos eat human livers, no one would go near her. When she meets Dae-woong, she starts to feel like she is human but sometimes exerts her superhuman strength when no one, except for Dae-woong, is around (she was once seen by two children at a park). She becomes Dae-woong's girlfriend and tries to mold their relationship into a normal girlfriend-boyfriend one. Despite the fact that gumihos are ferocious, she is more like the cute and nice type. Since she was made of fire, she is afraid of water.


No Min-woo as Park Dong Ju

A veterinarian at an animal hospital, he is not human but not a legendary animal either. He knows a lot of things about human life. Dong Ju is shown to be the antagonist. He tends to speak in a calm way to Mi ho, but doesn't seem to be that way to other people. He tried to capture Mi ho and put her back inside the painting, but when Mi ho tells him that she wants to become a human, he changes his mind. So, he tells Mi ho that she will become human if she drinks his blood and if Dae-woong will keep her orb inside his stomach for 100 days. However, he doesn't tell her that Dae-woong will die if he gives the orb back to her when those 100 days are over. When Dong Ju finds out that Miho is like a reincarnation of Kil-Dal (a gumiho he once loved), he tries to keep her safe.

The female antagonist of the drama, she is Dae-woong's senior. She and Dae-woong had strong feelings for each other for a long time. However, when Dae-woong found out that she was using him, he started to lose interest in her and ignore her. Hae In doesn't like Mi ho, and she becomes infuriated and jealous when Mi ho becomes Dae-woong's girlfriend. She also tried to get Dae-woong to ask her out, but because Dae-Woong can't date other people because of Mi ho's fox bead, she gets rejected a few times. Hae In thinks that she knows Mi ho's difference so she tries to do whatever she can to find out Mi ho's true identity.

The director of Dae-woong's action school. He is so fond of Dae-woong's skills and gives him special treats. When he sees Mi ho jump high and run fast, he looks for her, and whenever he finds her, she runs away without noticing him. He is eventually seen by Miho, but he doesn't see her. He also has feelings for Da-woong's aunt, Cha Min Sook. The first time he encounters Dae-woong's aunt, she is alone on an elevator and has just broken wind from an upset stomach. He enters the elevator, smells Min Sook's gas, and then the elevator lets others on as well. The others eye Cha Min Sook and believe that she broke wind. Ban Doo Hong graciously asks everyone on the elevator to excuse his upset stomach. Cha Min Sook is grateful. Ban Doo Hong is also widowed, as he has said that he raised Seon Nyuh by himself.

Doo Hong's daughter and Dae-woong's best friend. She has feelings for Dae-woong but doesn't seem overtly jealous over the fact that Mi ho is his girlfriend, even though she seems heartbroken at times. She also seems to become good friends with Miho. She eventually ends up with Byung Soo.

He wants Dae-woong to make the right choices in life but accepts his dream of becoming an actor after seeing him mature.

Dae-woong's aunt. She does whatever Dae-woong's grandfather tells her to do. She has feelings for Ban Doo Hong but has never been able to tell him. She often ends up making a fool of herself while in the presence of her crush.

Dae Woong's other best friend. He is supportive of Dae-woong. He has feelings for Seon Nyuh but Seon Nyuh doesn't seem to know. They later on end up together

Dae-woong's friend when he was in high school.

My Girlfriend is a Gumiho Trailer