Meet Xiah Junsu and Kim Junsu at his musical concert 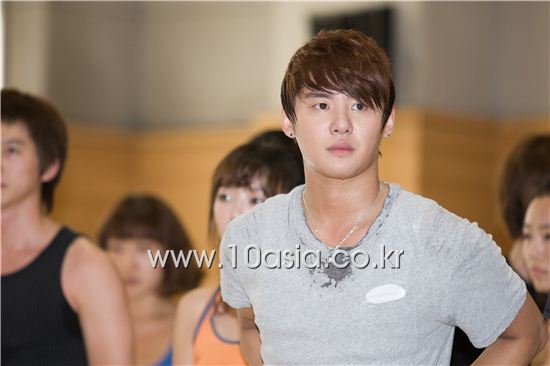 If TVXQ's Micky Yoochun and Hero Jaejoong each have KBS "SungKyunKwan Scandal" and Japanese TV series "Hard to Say I Love You," respectively, Xiah Junsu has musical "Mozart!" Ahead of the other two members, Xiah Junsu had stood in front of the audience with his real name Kim Junsu in January and received much applaud from them. Although he was criticized for lacking in delivering his lines due to different vocalization methods used for musicals, his appealing voice was enough to portray the Wolfgang who yearns for freedom by breaking away from his father's desires and pressure. And as a result, Kim Junsu took the award for best new musical actor at the 4th Musical Awards. Now for the first time in months, he will return to the theatrical stage with "Kim Junsu's Musical Concert" on October 7.

"Kim Junsu's Musical Concert" will revolve mainly around numbers from musical "Mozart!" in which he starred and "Elizabeth" which will show in Korea for the first time in 2012 in time with its 20th anniversary. But this concert has more significance than just being a gala concert. The Gymnastics Stadium at the Olympic Park which seats 10,000 people has been selected as the venue for the concert who's concept is 'release.' And while a stage incorporating the use of video is being created to fit a concert of such scale, part of the choreography has been changed as well.

At the rehearsal revealed to the press at the Chungmu Art Hall on September 27, choreography utilizing TVXQ's "MIROTIC" by far caught people's eyes. As the concert's subtitle 'Levay with Friends' indicates, composer Sylvester Levay, creators of "Mozart!" and "Elizabeth" will also be part of the concert. Over a total 20 musical numbers will be introduced by an orchestra with Levay as the conductor, and German musical actor Uwe Kroeger who took part in the premiere show of "Elizabeth" in Austria, will participate as a special guest and put on a unique performance with Kim Junsu and Jeon Dong-suk. Other musical actors such as Park Eun-tae, Seo Beom-suk and Shin Young-sook who played pivotal roles in "Mozart!" will appear in the concert as well.

You will have made a misjudgement however if you think only musical numbers will be performed just because the show is a musical concert. A song Levay composed for Kim Junsu and his single "Intoxication" released in Japan in May will also be revealed for the first time at the concert. "Kim Junsu's Musical Concert" which dreams of becoming "a performance where musical manias and fans mingle," will run for four days from October 7 at the Olympic Park.