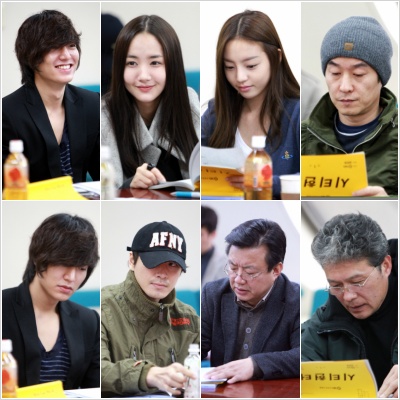 
The main cast of new SBS' TV series "City Hunter" has attended the first script reading for the drama, according to the show's promoter 3HW on Wednesday.

"The atmosphere during the reading was great with the passion from the young actors and the know-how from the veteran actors," a member of the crew from the series was quoted as saying. "We have high hopes in them working well together to create a good show."

Lee Min-ho will play an MIT doctorate degree holder Lee Yoon-sung and Park Min-young will take on the role of Kim Nana who is a judo athlete-turned bodyguard working at Korea's presidential office.

"City Hunter," originally a Japanese manga series by Tsukasa Hojo, is about a private detective named Ryo Saeba who works to get rid of crime in the city of Tokyo during the latter half of the 1980s.

Producer Jin Hyuk of hit dramas "Brilliant Legacy" and "Princess Prosecutor" and writer Hwang Eun-kyung of "The President" will collaborate to create "City Hunter" set to premiere on May 25.