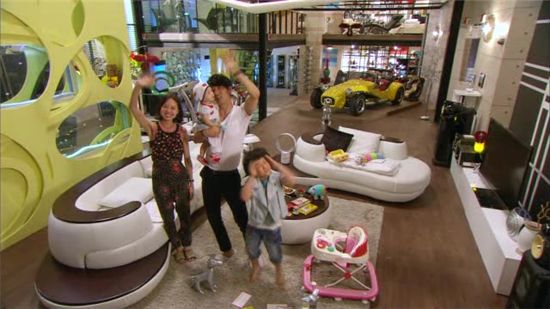 
MBC's romantic comedy "The Greatest Love" finished its run last night after marking its fifth consecutive win on the Wednesdays and Thursdays primetime TV chart, according to the results of two media research companies on Friday.

"The Greatest Love" posted an average viewership rating of 16.6 percent on Total National Multimedia Statistics' (TNmS) chart and 19.5 percent on AGB Nielsen Media Research's (AGB) poll, with its final episode, in particular, marking 21 percent on AGB's survey to surpass the 20 percent mark for the first time.

The 16-part drama starring Cha Seung-won, Kong Hyo-jin, Yoon Kye-sang and Yoo In-na, which ran from May 4 to June 23, touched on various aspects of show business through the comical romance between top actor Dokgo Jin (played by Cha) who is loved by people and former idol star Goo Ae-jung (Kong) who, in contrast, is looked down by the public for whatever she does.

In the final episode, Dokgo Jin, after recovering from his dangerous heart surgery, proposes to Goo via a television talk show and marries her despite mounting complaints from his fans.

The president of Dokgo's agency then unveils a so-called secret video of Dokgo Jin, which was in fact, Dokgo's last words to the public, also regarding his lover, before undergoing his heart surgery in case he died from it.

Dokgo and Goo then start to regain popularity and in the last scene, the two are seen happy with their 10-month-old baby girl.

"City Hunter" which is a story about young man raised to seek revenge against five corrupt politicians responsible for the death of his father and his father's colleagues, is based on a popular Japanese comic of the same name by Tsukasa Hojo and stands as its prequel.

The story is so far heading for its climax, as conflict deepens between the young 'City Hunter' and his foster father who differs in their ideas of revenge while a young prosecutor are also hot on their heels.

The drama which centers on the romance between a conglomerate's son and his young maid who won a 10 billion won lottery, shows how people, both rich and poor, can by swayed by money.