MBC "My Princess" leads for 2nd week on TV chart 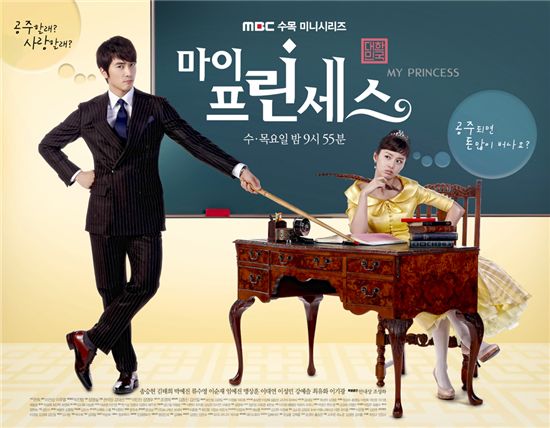 
MBC's series "My Princess" marked the highest rating in terms of viewership for the second week, according to the findings by two media research surveys disclosed on Friday.

The latest statistics by Total National Research Media (TNmS) showed that "My Princess" scored an average rating of 15.45 percent and 18.8 percent on AGB Nielsen Media Research (AGB), the numbers slightly down by one to two percent from last week.

"My Princess," starring Kim Tae-hee and Song Seung-heon, tells of ordinary college girl Lee Seol (played by Kim) who suddenly discovers she is a lost descendant from Korea's Joseon Dynasty (1392-1910).

This weeks episode showed Lee finally resolving to take on her duty as a princess but also being forced to sever ties with her adopted mother to enforce her position legally.

SBS "Sign," a medical suspense drama which is fast narrowing gap with the front runner, showed an average viewership rating of 14.45 percent on TNmS chart and 16.5 percent on AGBs poll, a one to two percent improvement from last week.

Starring Park Shin-yang and Kim A-joong, this weeks episodes had forensic examiners Yoon Ji-hoon (Park) and Ko Da-kyung (Kim) chase after a serial killer while Lee Myung-han (Jeon Gwang-yeol), the head of the National Forensic Service who kicked Yoon out from his former post, grudgingly admitting his mistake in examining a dead body.

The drama starring Choi Soo-jong and Ha Hee-ra tells of the dreams, ambitions and schemes surrounding the presidential race of a lawmaker Jang Il-joon. In this weeks episode, Jangs rival pays the mother of Jangs foster daughter Joo Il-ran to reveal Jangs scandalous past with her in an attempt to end his political life.