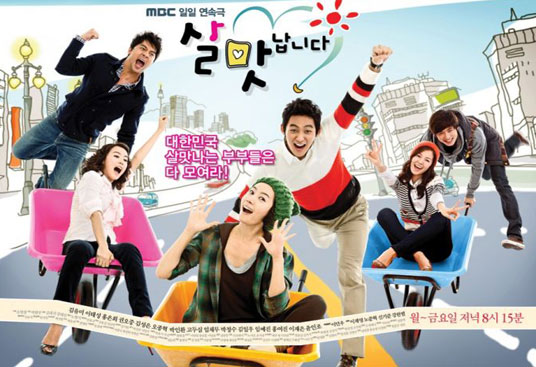 "Is life treating you well?"

A message of hope to married couples who find life dreary and boring!

A story about the love and married life of six married couples who are pigeonholed into six types of marital relationships!

A couple thats been married for 35 years and counting. An emotional, hot-tempered wife and a laconic husband who has a heart of gold. They finish each other sentences and have a loving relationship. They show what the essence of love is through their lives.

An immature husband married to a hot-tempered older woman. Accidentally impregnating a woman six years older than him for a night of sex, Jang Yoo-jin finds himself forced to do the decent thing and marry Hong Min-soo. While he faces irreconcilable differences with his wife, his wife in turn, infuriates his father, straining his marriage even more. After Jang mends his relationship with his wife and finally finds marital bliss, he learns about his wifes distasteful past and heads to divorce court.

A couple married for 10 years. A clueless wife married to a genial husband. All the love in their marriage has been sapped away and they have no feelings for each other whatsoever. The husband has serious debts that he accumulated from speculating in the stock market. Due to his debts, he eventually loses his job whereupon his wife decides to divorce him. But they overcome their financial crisis and find that they still do love each other until death do they part.

A self-made millionaire doctor and male chauvinist married to an obedient wife who will stand by her man. Ok-bong devoted her entire life to her husband and she served him in whatever way she could for 30 years. But when she lives together with her utterly obnoxious daughter-in-law, she finds herself getting mad at her, which also opens her eyes to the pathetic life she had life until now. She unleashes her pent-up anger towards her husband and demands a divorce.

An average man who cares about love more than anything else is married to a woman who cares about money above anything else. Ye-joo is a successful plastic surgeon and a highly desirable bachelorette. But Jin-soo, an average dude with an average job, pursues her relentlessly, professing his undying love for her. But Ye-joo keeps angling to find a highly desirable bachelor but gets a rude wake-up call when she finally dates a guy with all the attributes she wanted in a man. She realizes what really matters in a life partner.

The husband lives with an inferiority complex and is unwelcome in all social circles and married to a pitiful woman who has constantly been used by all the men she used to date. They wish to lead normal lives and raise a family but they find it hard to conceive a child and so they go on living listlessly in their childless marriage. They show that love starts from the simple things in life.