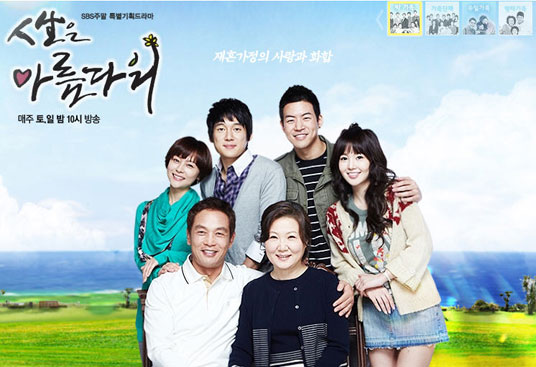 "Life is Beautiful", written by "soap opera queen" Kim Su-hyun, who most recently penned "Mom's Dead Upset" for KBS2, depicts the struggles of a gay couple played by Song Chang-ee and Lee Sang-woo, whose families, unaware of their orientation, constantly pressure them to go on blind dates with women.

A drama about a family, set in Jeju island. A bright and exciting story about the love and harmony of a united family.

A family drama may be considered good depending on how many concerns and conflicts it shows existent within that family, not just because it depicts on adultery or the relationship between the mother-in-law and daughter-in-law. In that regard, the premiere episode of new TV series "Beautiful Life" by Kim Soo-hyun lived up to her reputation [as "the best writer" in Korea].

Each character in the show emerges expertly as every family member throws in a remark at an incident where mother-in-law (played by Kim Yong-lim) gets angry saying she waited 40 minutes at the airport and the daughter-in-law (played by Kim Hae-sook) is upset as she was only 14 minutes late. And the depth of Kim's insight on human nature is revealed when the adulterous husband (played by Choi Jung-hoon), who left home thirty years ago, announces that he will be moving back in, to which his wife reacts by cutting herself off from the world and resisting by not wearing her hearing aid.

More than anything, instead of dealing with the topic of gay romance as a subject of humor, her audacity in presenting a gay couple -- the oldest son Tae-sup (played by Song Chang-eui) and divorced man Kyung-soo (played by Lee Sang-woo) -- and placing their realistic issues right in the face of a weekend family drama, the most conservative genre in television, is almost exhilarating.

The viewer may also find themselves looking forward to watching how acutely the members of this heterosexual family, whom many viewers will project themselves upon, will clash over the issue surrounding character Min-jae who got divorced and remarried many years ago but still feels insecure about not being the biological mother of Tae-sup. One may actually agree or disagree to people describing writer Kim Soo-hyun as "the best writer." There are many other television drama writers who have recorded high viewership ratings. But when it comes to approaching various contemporary family issues in Korean households through the most innovative viewpoint, there is no one, in the past nor the present, who could equal this veteran 68-year-old writer.