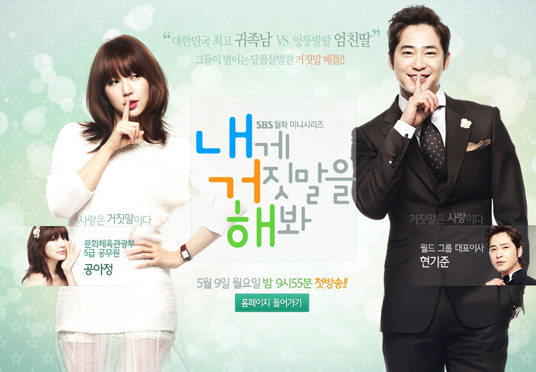 Also known as : Sweet Scandal, Try Lying to Me

These korean series is about a girl,Gong Ah-jung played by Yoon, who lies that she is married to Hyun Ki-joon played by Kang. It is directed by Kim Soo-ryung and Kwon Hyuk-chan, produced by Jo Sung-won and written by Kim Ye-ri. On its first airing it ranked 20th nationwide.

Gong Ah-jung (Yoon Eun-hye) is a 5th level government employee of the Ministry of Culture, Sports and Tourism and mistakenly lies that she is married to Hyun Ki-joon (Kang Ji-hwan), a rich man and President of World Hotel.

As the rumour spreads Ki-joon is miserable as his friends also believe he is married to Ah-jung. After a series of events they both eventually agree to pretend to be married. Things get more complicated when Ki-joon's ex-fiance and a close friend of his brother Oh Yoon-joo returns from France. However Ki-joon eventually falls for Ah-jung.