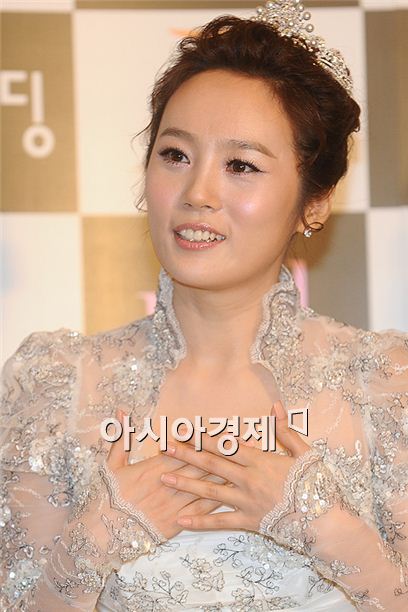 
Singer Lee Soo-young, just hours away from getting married, said she is worried about her friends not wanting to receive her wedding bouquet.

Speaking to reporters ahead of her nuptials at wedding house Villa de Bailey on Tuesday afternoon, Lee made the remark when asked who will receive her bouquet.

"That's what I'm worried about. They all don't want it," she said smiling, drawing laughter from the crowd.

She also attempted to explain the reason for it, saying "I wasn't able to get married for three years after receiving two bouquets in a year -- one at Park Kyung-rim's wedding and another at Seo Min-jung's. I think that's why nobody wants mine."

In Korea, the bride usually in advance designates who will receive the wedding bouquet when she tosses it after the ceremony.

Lee will wed a businessman ten years older than her -- the two dated for a year after being introduced to each other through an acquaintance.

Lee, 31, is a top ballad singer who debuted in 1999. She rose to instant stardom with her debut single "I Believe" and has since released a total of nine full-length albums and five mini-albums.