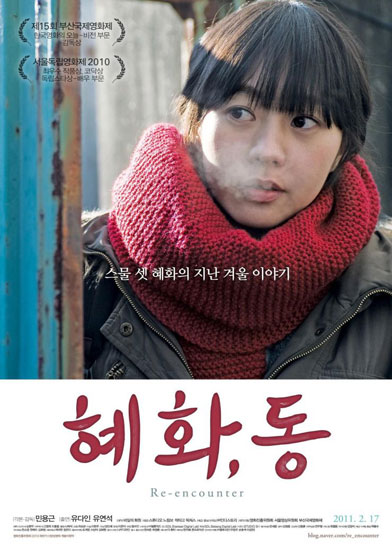 Previously known "Hye-hwa, Child" on HanCinema To recover memories from five years ago Can our story start again? 18 year-old Hye-hwa and Han-soo were lovers but as soon as Hye-hwa got pregnant Han-soo disappeared completely. Five years later, Han-soo suddenly appears in front of Hye-hwa and the two of them find out their baby is still alive. Hye-hwa doesn't believe Han-soo. However, after finding out her child had been adopted, she can't help but weaken. "Re-encounter" drew favorable reviews from critics and audiences alike when it was screened at film festivals last year. At the 15th Pusan International Film Festival it won Best Director in the Korean Cinema Today: Vision section and at the 36th Seoul Independent Film Festival it won Best Picture, the Independent Star Award (actress) and the Kodak Award.

The film follows the story of Hye-hwa (Yoo Da-in) and Han-soo (Yoo Yeon-seok). The two fall in love at 18, but when Hye-hwa reports she is pregnant Han-soo disappears to Canada. Five years later, Han-soo shows up with the news that their child, who Hye-hwa was told died in childbirth, is alive and has been adopted.

Hye-hwa is struck upon learning the news, and she is forced to relive the pain of her past, but in the end she decides to search for her child. Director Min Yong-geun, who also wrote the script, took a risk in deciding not to rely upon top stars to tell his story. The actors' talents shine through and their performances were well-received by film critics.

The movie hits theaters on Feb. 17. The Korean title of the film, "Hye-hwa, Dong," is not related to the Hyehwa-dong neighborhood in central Seoul.