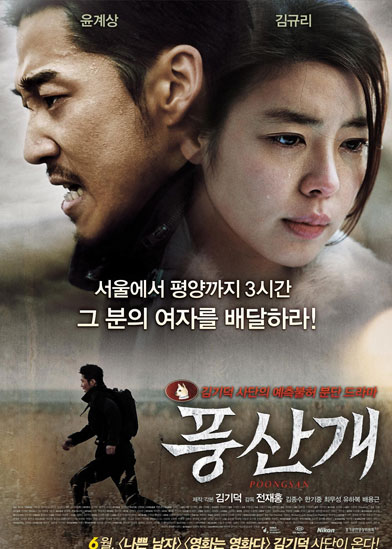 Part love story, part postwar tragedy, with a dose of comedy thrown in, the low-budget film "Poongsan" depicts the sad reality of the division between the two Koreas. Poongsan (Yoon Kye-sang) has the unenviable - and death-defying - job of delivering messages across the North and South Korean border to separated families.

When South Korean government agents ask him to smuggle in In-oak (Kim Kyu-ree), the lover of a high-ranking North Korean defector, into the South, the damsel and rescuer fall in love instead. Written and co-produced by Kim Ki-duk, who just won the Prize Un Certain Regard for "Arirang - Movie" at last month's Cannes Film Festival, and directed by his protege Jeon Jae-hong, "Poongsan" came to life on just one-tenth of the average budget for Korean films. Poongsan, whose real name is never revealed, is a mysterious man who delivers whatever brings him money by going back and forth between Pyongyang and Seoul. One day, the delivery man is ordered to bring In-oak. She joins the deliveryman on the life threatening journey. In the middle of this trip, In-oak and the man start to fall in love, but their romance is put in jeopardy by the obstacles they encounter. Poongsan, a young man with the eyes of an innocent child, crosses over North and South Korea to deliver the pain and longings of separated families. Even though this can cause him get shot, he takes the risk without any fear. One day, by a secret request by South Korean government agents he sneaks into North to bring over In-oak, the lover of a high-ranking North Korean defector. On their way to South Korea, they fall for each other while experiencing life-and-death situations together several times. However upon their arrival, they're welcomed by agents who capture and torture Poongsan while In-oak gets disappointed with her old lover who has changed so much over the past years Source http://www.koreanfilm.or.kr