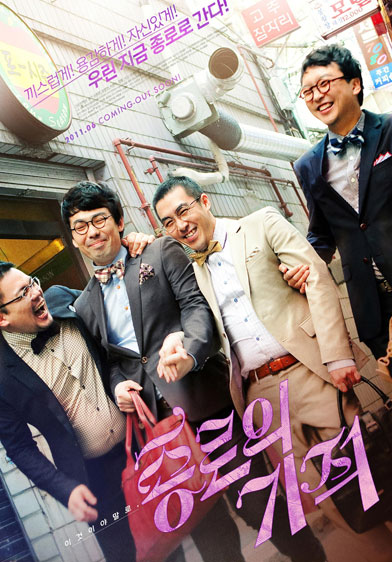 Miracle on Jongno Street is a story about 4 gay men who try to lead a 'normal life'. Despite their weary lives, Eden in Jongno is a place where they make friends and find love, and in a way it could be referred to as their private 'Garden of Eden'. The movie is a real life documentary about 5 men including the director himself, who meet and become friends in Eden.

In the middle of making a movie Jun-moon, a director, loses his self-confidence due to social scrutiny regarding his sexual orientation. Byung-gyon, a gay rights activist, has been participating in movements to establish equal rights for homosexuals.

Young-soo, a chef who moved from the countryside 10 years ago, lived a lonely life but he finds happiness after joining a gay choir called G-Voice. Yol, who works for a major company, dreams of the day him and his partner, can have a legal wedding. These stories are no different from the lives of the heterosexual majority and the relatively normal portrayal of these men is original and a significant achievement in the positive representation of homosexuals. (HONG Hyosook)