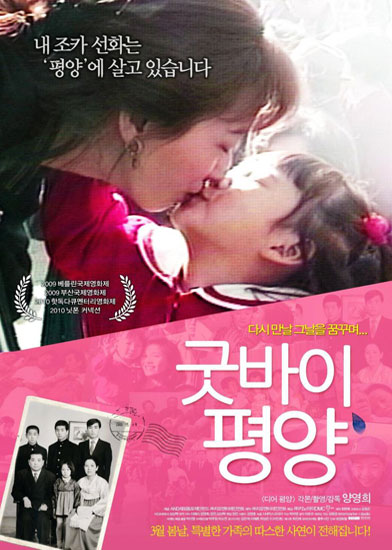 "Goodbye, Pyeongyang" is co-production between South Korea and Japan

Director Yonghi Yang's previous piece, Dear Pyeong Yang, has told of North Korean tales. This time, he brings in "Sun-hwa", the sister of a brother who migrated to North Korean from Japan in the beginning of the 1970s. Through "Sun-hwa", it shows the images of the immigrant generation as well as the generation that was born and raised in North Korea.

Although 'Sun-hwa's growth stages are very typical, the specialty of the North Korean society is quietly shown. Through the process of establishing her identity in the North Korean society as an immigrant generation, North Korea isn't portrayed as simply an unsociable society but as an area on earth which hold the universal image of the human society. This may be said to be producer Yangs special merit. The picture of family gives a normal everyday life view of the known-to-be different name, North Korea.