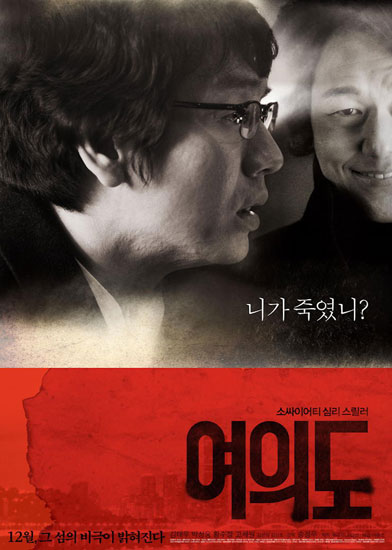 Something always happens when I meet him. The guy that I wanted to kill was found as a "corpse". Yeouido, where political world, media industry, and stock market are concentrated, is a work place for Section Chief Hwang Woo-jin. He is number one in the lay-off list in his stock company. What is worse, he is dying slowly because of his heavy debt and endless fights with his devoted wife. He even finds out that his trusted co-worker is trying to lay him off with the help from Woo-jin's boss. He dwells on his own misfortune to his friend Jeong-hoon, who will do anything to keep justice, "I want to kill that bastard." Surprisingly, Woo-jin's co-worker is found dead in next morning. Chances that came with no notice to the guy who wants to survive. And Because of his co-workers death, Woo-jin gets a second chance in his company and gets promoted but the surprising chance is not good for him. People who treated Woo-jin wrong are getting killed one by one and he becomes a suspect. He now trembles for fear from the supposition that Jeong-hoon is an actual killer.