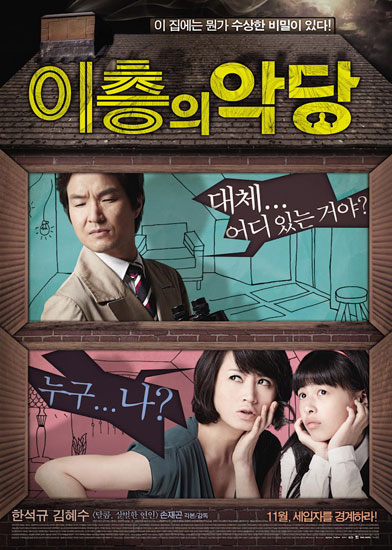 Also known as "Villain on the Second Floor".
Han Seok-kyu, the charismatic South Korean spy in 1999's "Shiri," and Kim Hye-soo, the seductress in 2006's "Tazza," team up as an odd landlord-tenant couple. Yeon-joo (Kim) is a single mother who lives in a two-story townhouse with her middle school aged daughter.

To pay the bills, she decides to rent out the second floor of the house.

Her tenant is Chang-in (Han), who claims to be a writer. Although he seems like an ordinary guy, Chang-in seems to have come to the house with a purpose, and sneaks around when he can.

That would seem like cause for eviction for most, but Yeon-joo isn't like most landlords and is suffering a bout of depression. Meanwhile, her daughter is going through a normal teenage obsession with her looks, so she doesn't notice his odd behavior either.

But even though neither one of them is actively trying to put a stop to Chang-in's behavior, their respective problems serve to thwart his plans.

What does Chang-in want from Yun-ju's house? Who is he? The mystery unfolds with comical scenes between Yun-ju and Chang-in.