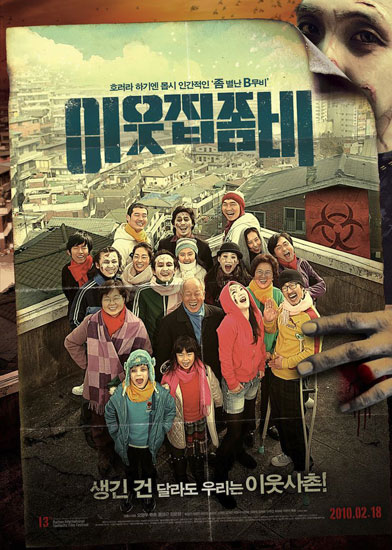 The Neighbor Zombie is comprised of six episodes centering on the theme of a zombie virus. This film is set in the aftermath of a zombie outbreak in Seoul, 2010. The government orders the execution of those that are infected. People who have infected family members or lovers try to defend them from the government policy. Eventually, a vaccine is developed, but the transition from zomebiehood to humanity, is stressful and difficult. Episode 1 "Crack" directed by OH Young-doo An action figure collector accidentally gets infected by the zombie virus. Episode 2 "Run Away" directed by OH Young-doo A special love story of a beautiful girl and her romantic boyfriend, who gets infected and slowly transforms into a zombie. Episode 3 "Mother, I Love You" directed by HONG Young-geun A woman having to witness her infected mother slowly deteriorate each day. Episode 4 "The Age of Vaccine" directed by RYOO Hoon Dr. Park, who acts as a guinea-pig himself, tries to make a vaccine to cure zombie virus. He finally develops the cure but hes left with a big debt he must run from. Episode 5 "After That, I'm So Sorry" directed by JANG Yoon-jung After the development of vaccine, Seoul once again finds peace. However, the future is still uncertain for those who were cured. Episode 6 "Pain Killer" directed by HONG Young-geun A story about strained life of a writer, who always has to work under tight deadline.

Omnibus movie with the theme of a zombie virus As a worldwide virus that turns people into zombies starts to spread in Seoul, the Korean government declares martial law to wipe it out. The government's plan becomes more vigorous and the zombies are put in great danger. But people work to protect them by providing shelter and food as they are more than just infected patients - they are friends and family members as well.

Seg. 1 - Between Gaps - Script/producer Oh Young-Doo. The process of a figure mania changing into something through some unknown power... A human story that becomes the starting point of the whole movie. Seg. 2. Let's Run - Script/producer Oh Young-Doo. A boyfriend who is turning into a zombie and has a changing eye, and a normal girlfriend. Their love story and their story of escape. Seg. 3. Love that Cuts Bones - Script/producer Hong Young-Guen. A mother and daughter. Their story with police forces who come into their home to destroy the zombies. Seg. 4. The Era of Vaccines - Script/producer Ryoo Hoon. The story seen through a special forces officer's viewpoint. About the struggle between a zombie whose both eyes have changed but has found its intellect and a medicine company related to the zombie vaccine. Seg. 5. After... Sorry... - Script/producer Jang Youn-Jung. The vaccine has gotten rid of the zombies in the city... A man who had been a zombie and a woman who lost her parents because of zombies... Who is the victim and who is the attacker? Seg. 6. Pain Killer - Script/producer Hong Young-Guen. A writer who is fighting against the deadline without even seeing how he is changing. A story about what kind of ending he faces.