The Man From Nowhere 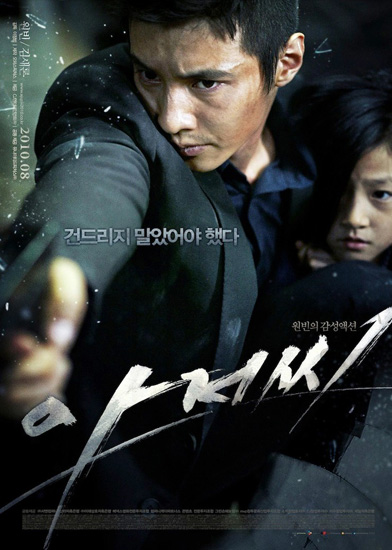 Formerly known as "Mi.st.er" Having once done time behind bars, CHA Tae-sik now leads a quiet life. His only connection to the rest of the world is a little girl, So-mi, who lives nearby. So-mi's mother, Hyo-jeong, smuggles drugs for a drug trafficking organization and entrusts Tae-sik with the product.
When the traffickers find out they kidnap both Hyo-jeong and So-mi. Mistaking Tae-sik for another mule, the brothers that lead the gangMan-sik and Jong-sikpromise to release Hyo-jeong and So-mi if Tae-sik makes a delivery for them.

Tae-sik makes the decision to face the outside world in order to rescue So-mi. However, the delivery was part of a larger plot to eliminate a rival drug ring leader, Mr. Oh, and Tae-sik is arrested. At the same time, Hyo-jeong's disemboweled body is discovered, and Tae-sik realizes that So-mi's life may also be in danger. He fights off half a dozen detectives and escapes from the police station. Now on the run, Tae-sik pursues Man-sik and Jong-sik. In the process, he discovers that their drug ring operates around kidnapped children.

Stumbling upon a factory where the brothers have childrens organs removed to accommodate the drugs, Tae-sik rescues one child just before surgery and becomes enraged at the prospect So-mi may already be dead. Tae-sik prepares for a battle with Man-sik and Jong-sik, putting his own life at risk


The Man From Nowhere Trailer