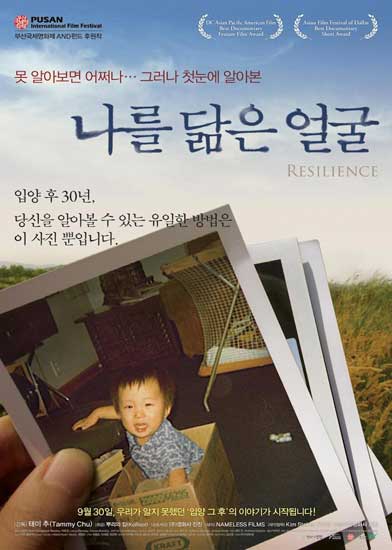 "Resilience" is a co-production between South Korea and the USA Each year, thousands of children are sent to the West for adoption. South Korea has sent more children than any other country, an estimated 200,000 over the past 55 years. Despite being one of the worlds strongest economies, it continues to do so. With every new family created by adoption, another family gets torn apart. A story of loss and separation, Resilience is a character-driven documentary that takes a unique look at international adoption from the perspective of a Korean birth mother and her American son. A single story among the thousands of stories untold, the film follows the remarkable journey of Myungja as she reconnects with her son Brent (Sung-wook) after 30 years apart. Through their initial reunion on national television to subsequent meetings and departures, they attempt to build a relationship amidst family betrayal and the legacy of adoption. But with so many obstacles--language, culture, distance, and unspoken loss--can two strangers find a way to become mother and son?