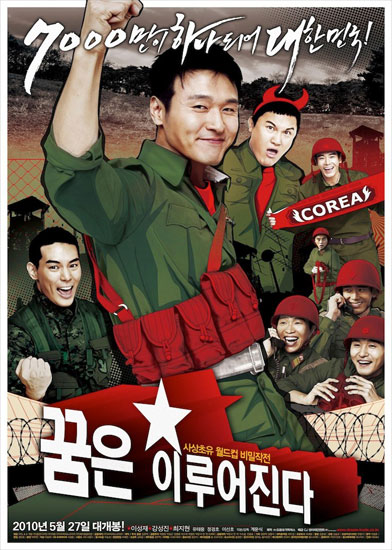 Also known as "Dreams Come True" As the World Cup gets started in 2002, a North Korean squad commander (Lee Seong-jae) stationed at the DMZ who is crazy about football is frustrated that he cannot participate in the excitement in the South. He loves football so much that he even memorizes all the names of the members of the South Korean national team.

One night during a search operation in which the leader and his troops chase a boar to satisfy their hunger, they come face to face with soldiers from South Korea. It doesnt take long for the soldiers to discover that they share a love of football and they begin secret radio communications so they can listen to matches together. When their secret is uncovered, the squad leader and his troops must find a way out of the situation.

Note When the Korea-Japan World Cup kicks off in 2002, a North Korean squad leader stationed at the DMZ is frustrated that the political situation is preventing him, a football enthusiast, from enjoying the games. One day, the squad comes face to face with their archenemyan armed South Korean reconnaissance squadwhile they patrol the DMZ border! Tension is short-lived, however, when they find common ground in their mutual football fever. Eventually, secret radio communications begin, with the South suggesting the North Korean squad listen to match broadcasts with them through radio transmission. But the Frequency Monitoring Team detects the squads discreet correspondence with the South Koreans. Refusing to get his men involved, the squad leader turns himself inand fearing for their leaders life, the squad devises a plan for his escape.


On the Pitch Trailer