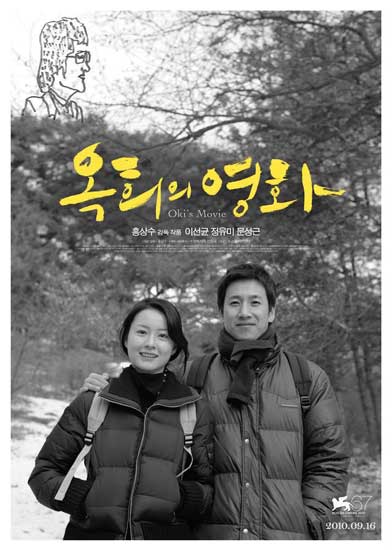 OKI'S MOVIE is comprised of 4 short films: A DAY FOR INCANTATION, KING OF KISSES, AFTER THE SNOWSTORM and OKIS MOVIE. Three main characters appear in all of the four shorts, having different but overlapping roles in each of them. The last one, OKI'S MOVIE is a story of a film student Oki who made a film about two men she has dated; one young and the other much older. In her film, she makes a cinematographic construction of her experiences of coming to Acha Mountain with each man with a year apart. She juxtaposes her experiences with each man by paring them according to places on the mountain: the parking lot, the entrance, a small pavilion, the public toilet, the wooden bridge, and halfway up the mountain. We see the differences and similarities of the two experiences in details. And by this composition, we may feel that we are seeing an overall picture of Oki's relationships with the two men. "Oki's Movie" is made up of four smaller parts. Each part shows three main characters and their differences. This is the summary of the last part, called "Oki's Movie": "Oki's Movie" A film student Oki makes a movie about a young man and a older man she both dated. She went to the mountain with both of these men, a year apart. In her movie, she shows her experiences with both of these men in different spaces. The parking lot, entrance of the mountain, in front of the gazebo, bathroom, in front of a wooden bridge, halfway up the mountain. We are able to see the differences between the two experiences, because they are portrayed side by side. We get an overall picture of Oki and the relationship with the two men.