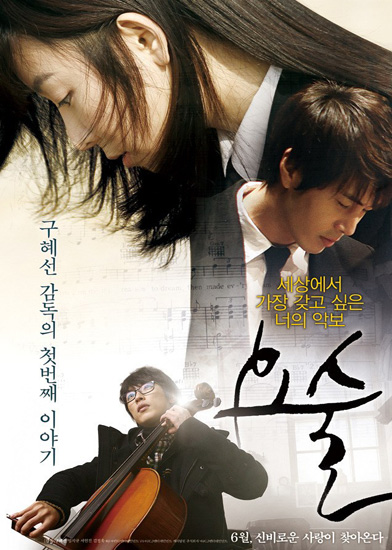 To Myoung-jin, who is merely a cello student at his music school, Jung-woo is seen as the most brilliant musical genius. When Myoung-jin suddenly receives news to audition alongside with Jung-woo, he asks Ji-eun to be his accompanist. Myung-jin is surprised to learn that Ji-eun has already been asked by Jung-woo to be his accompanist, and to play the same piece at that, but Ji-eun is unable to refuse their touching offers. Come audition day, Jung-woo and Myoung-jin are both unable to audition, due to Jung-woos grand mistake.

Shortly after, Jung-woo faints while playing Ji-euns composition, Magic, and Myung-jin has no choice but to continue in his place. As Myung-jin nurses Jung-woo back to health, he gives him musical lessons. As Jung-woos health deteriorates, he gradually begins to learn about the depth of Magic. Jung-woo asks Ji-eun about the truth of Magic, but she hesitates; the more he wavers from Ji-eun to Myung-jin to Magic, Jung-woo waxes cynical. Ji-eun, unable to withstand Jung-woos change, runs out, but Jung-woo stops her from doing so.

Myung-jin, on the other hand, cannot hide his feelings anymore and kisses Ji-eun...