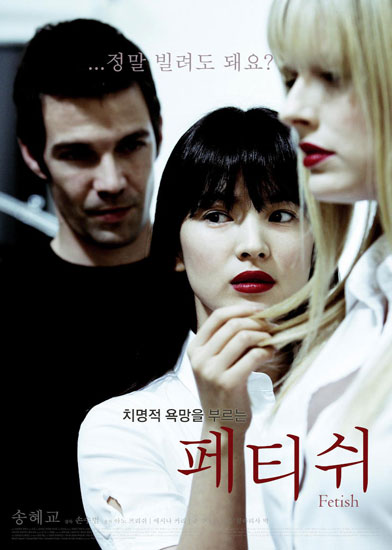 "Fetish" is a co-production between South Korea and the USA Also known as "Make Yourself at Home". Synopsis: "Fetish" is feature debut of the director Soopum Sohn, who was invited to PIFF and Cannes with his short [Fish in the Sea Is Not Thirsty] in 2000. The film has been noted since its early production stage starring the celebrated Korean actress Song Hye-kyo. In the upper class suburbs of New Jersey, Korean-American Peter is starting a new life with his mysterious bride, Sookhy, whom he met through a marriage broker in Korea. She chose this foreign country to avoid the power of shamanism, but her fate doesnt let her run way from it. The film portraits church-based Korean communities in states, where the traditional values are rather ignored by American pragmatism and conflict arises between two different cultures-orient and occident. The two cultures get close and wrecked, just as Sookhy tries to be American woman imitating her neighbor Julie. "Fetish" surprises and confuses the audience with its complexities of cultural context and religious madness.