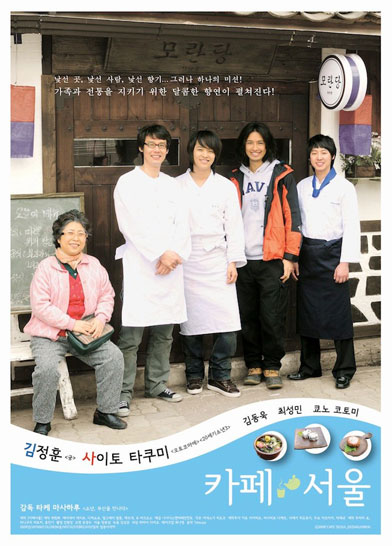 Cafe Seoul is co-production between South Korea and Japan. Jun, a Japanese freelance reporter, discovers hidden gem of Korean traditional bakery Morandang by chance in the middle of the city of Seoul, while covering stories of the city. Morandang takes him back to his memory of childhood and urges him to stay there for more stories. One day, Morandang is vandalized by construction villains in town who maliciously try to take the bakery and the owner and chef, Sang-woo gets hands injured. When Morandang is in danger of closing, his brother Sang-hyuk returns home after he has been frustrated from being a rock musician due to sudden hearing problem. But, Sang-hyuk wanders between frustration and denial, not able to guard Morandang and its secret recipes. As Jun, who fells in love with Morandang, inspires Sang-hyuk to restore his family tie and the business of Korean traditional bakery with secret recipes, Sang-hyuk and Jun are connected in friendship to save Morandang.