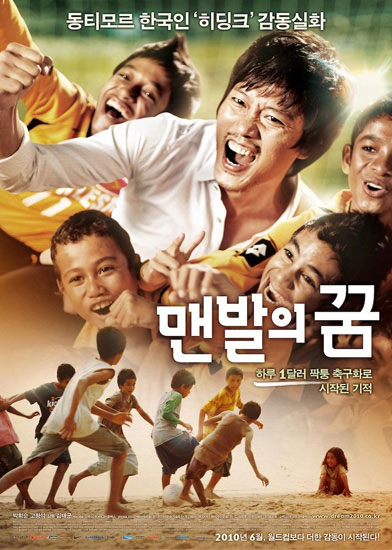 "Barefoot Dream" is a co-production between South Korea and Japan Also known as "Higanjima" A former soccer player who left Korea after failing in business and children from East Timor who didn't even have soccer shoes win the International Youth Soccer Championship. This movie is based on the true story of Coach Kim Sin-hwan, who was East Timor's Hiddink Everyone looks forward to Director Kim Tae-gyoon ("Temptation of Wolves" and "Crossing") who is known for his sensitivity and cinematography and Park Hee-soon, a rising star.


Note Wonkang, a former soccer prospect whose life didn't turn out quite promising. He heads to East Timor thinking that there would be plenty of opportunities for him. One day, he sees the street kids playing ball with bare feet. Thinking he can score by selling soccer shoes, he opens a sports equipment store, but realizes none of the kids can afford those fancy shoes or jerseys. Again, despaired, he is about to close up the store. Then, he decides to teach the kids how to play ball.