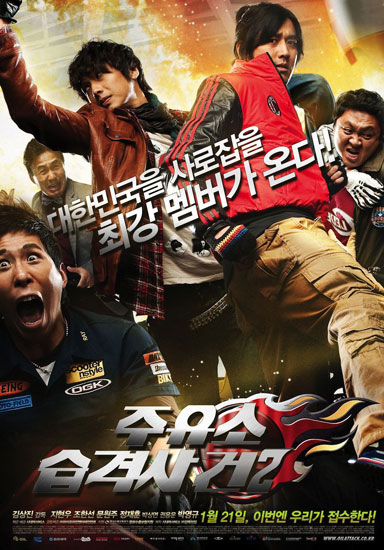 Director Kim Sang-jin has taken the megaphone into his hands for a second time to direct its sequel, "Attack the Gas Station 2". But it's hard for sequels to live up the glory of its predecessor, especially when the original was a megahit. The new movie's flaws are reflected in its very title. The film is nothing but a sequel; lacking the ability to stand and breathe on its own, it can only clutch desperately onto the number 2 at the end of its name. It is, at best, a homage to the original, with a younger cast and up-to-date music thrashing about.

Park Young-keu returns to the screen as the ill-fated gas station owner Mr. Park. He endorses the scheme of setting a thief to catch a thief, and proactively takes measures to counter motorcycle gang attacks by hiring a quartet of dodgy boys: a former kimchi factory heir who had to serve time for his lethal punch (Ji Hyeon-woo); a once-promising footballer with a killer high kick (Jo Han-seon); a potbellied wrestler who idolizes women (Moon Won-joo); and a video game addict who has mastered the art of bluffing fighting skills (Jeong Jae-hoon-I).

But Park ends up shooting his own foot when his four employees decide they have had enough of his tyrannical ways. With the help of a band of rather harmless troublemaking teens, the boys instigate a coup: they assume command of the gas station in order to collect their overdue salaries while Park, along with a buddy and a bevy of cheerleaders, succumbs to being held hostage on his own property.

These "anarchists" attract all the drivers in town by offering a cash-only, 50 percent sale. As the money starts rolling in, with the cheerleaders cheering on the side, however, a full-scale siege draws near as a bus-full of runaway "moralist" prisoners, a rebellious teenage motorcycle gang, a group of real gangsters and a drunk journalist (representing the conservative media giants under scrutiny these days) make their way to the hotspot. The film tries to derive laughter in Park's Catch-22 situation, which he embraces with surprising grace as he is forced to build a castle with soda cans, and the shift in allegiance and power among the hostages and their captors as different characters enter and leave the gas station, with a pinch of Stockholm Syndrome on the side.

If the first installment's wonderfully absurd take on modern life served as a refreshing kick during the woeful aftermath of the Asian financial crisis, then the second poses as a laughable bark protesting high oil prices and the growing divide between the haves and have-nots. Even when viewed as mindless diversion, however, the jokes just aren't very funny. But it isn't all too terrible though. The gritty action and discordant exuberance in the tradition of "Lock, Stock and Two Smoking Barrels" is there, with some moments of crafty bemusement. Yet it's bigger, and not bolder, and there are no weighty screen personas to fill in for the bad script and slow editing.