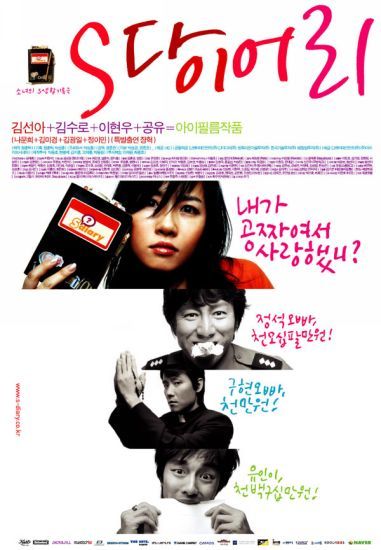 S Diary is a 2004 South Korean romantic comedy film about a woman who decides to interrogate her past lovers about why their relationships failed - then hatches a plot to take revenge on them.

On a dreary day Jini (Kim Sun-a) gets laid off by her boyfriend with the final note that he was only interested in making love to her but not in a lasting relationship. This triggers the girl's curiosity about whether her past three lovers were also only after her favors. As a result Jini checks back on her previous boyfriends including Ku-hyeon (Lee hyun-woo), an advocate of strong religious beliefs, macho college lover Jeong-seok (Kim Su-ro) and inexperienced Yoo-in (Gong Yoo) who makes a living as wandering artist. Will Jini's emotional journey be rewarded with sincere answers from her old admirers? Find out as S-Diary unveils its top secret material.