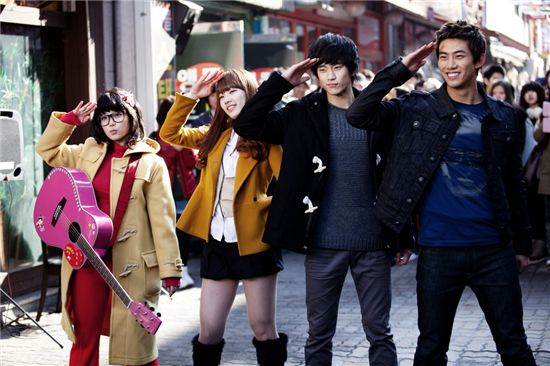 KBS series "Dream High" posted an average viewership ratings of 13.4 percent on TNmS' survey and 15.6 percent on AGB's report, the figures improving by one to two percent from last week.

This week's episode showed a triangular love slowly emerge between Ko Hye-mi (played by Bae) and her two schoolmates Sam-dong (Kim) who saved her from getting her head hit with a flower pot by taking the hit himself and Jin-guk (Ok) who comforted her when she got confused and frustrated by her school teacher paying her house debts.

SBS' spy thriller "Athena" stepped down a spot to land on second place after marking an average viewership rating of 12.45 percent on TNmS' poll and 14.3 percent on AGB's survey.

In this week's episode, Son Hyuk (Cha), the double spy for Athena, turns himself in to prevent another Athena spy Hye-in (Soo Ae) from getting caught as well.

MBC's "Queen of Reversal" yielded marks of 11.9 percent and 14.7 percent on TNmS' and AGB's survey, respectively, for Monday night. The drama did not go on air on Tuesday due to the South Korea vs. India match for the 2011 AFC Asian Cup which Korea won 4-1.

"Queen" starring Kim Nam-joo, Jung Joonho and Park Si-hoo, tells the story of joys and struggles in the workplace through divorcee Hwang Tae-hee (Kim), particularly through her relationship between her former husband and her new love interest.

Monday's episode showed Hwang Tae-hee and Park Yong-ha (Park) finally confessing their feelings for each other after experiencing much pains and trials in the workplace.