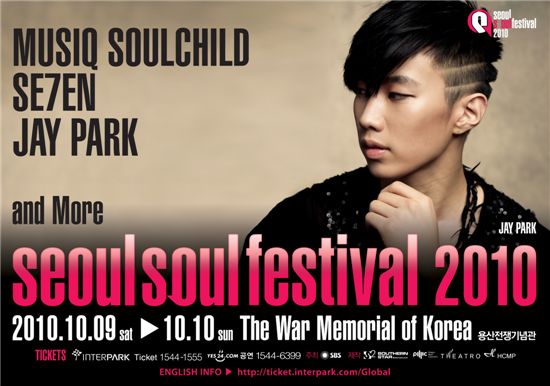 According to the concert's promoter S2 Entertainment, Park unveiled the arrangement for his performance at the Seoul Soul Festival 2010 on its official blog site yesterday, which includes "Count On Me," (Korean version) "bestie," "Doin' Good," "Speechless," "Demon" and "U Got it Bad."

"Speechless," a ballad written by dance team AOM member Cha Cha, will be unveiled for the first time at the music fest as well as the music video for the song "Demon," the theme for his upcoming b-boying film "Hype Nation."

The two-day soul music festival, which kicks off on October 9 at the Peace Plaza located in the War Memorial of Korea, will feature international singers Musiq Soulchild and Sean Kingston, and local artists Se7en, Taeyang, DJ DOC and Supreme Team.

Tickets for the concert are available at the online reservation site Interpark (www.interpark.co.kr).