JYJ to hold global showcase kicking off in Korea next week 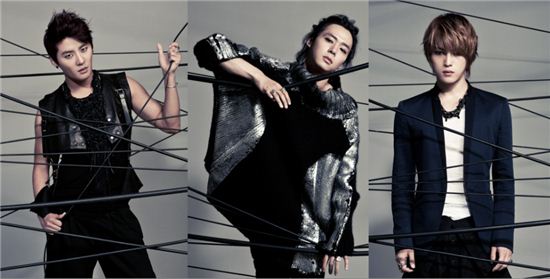 
Singers Hero Jaejoong, Micky Yoochun and Xiah Junsu of five-member boy band TVXQ, will set off on a global tour next week showcasing an album they have recorded as their new singing trio JYJ.

Prain Inc., the group's publicist, announced through a press release Monday that the three singers, back as Jaejoong, Yoochun and Junsu of group JYJ, will promote their new worldwide album "The Beginning" through a series of showcases kicking off in Korea on October 12.

Also the date for when the record goes on sale worldwide simultaneously, the showcase will be held at Korea University's Hwaseong Tiger Dome twice; at 6 p.m. and 9 p.m.

The trio will sing a total of five songs from the new album as well as performing the soundtrack to TV series "SungKyunKwan Scandal" starring Yoochun.

"We've fulfilled our hopes of presenting our worldwide album to our Korean fans first. We'll do our best to give them the best performances ever for the continued love and support they have shown us," the three were quoted as saying.

Proceeds from the showcase will be donated to worldwide non-governmental organization World Vision to help children around the world living in poverty.

Tickets for the showcase in Korea will go on sale on online reservation site Interpark at 8 p.m. on October 5. Details on the event's overseas locations -- nine cities throughout six countries -- have yet to be announced.

Jaejoong, Yoochun and Junsu will performing in front of local fans for the first time since halting their activities as TVXQ over a legal dispute with agency SM Entertainment.