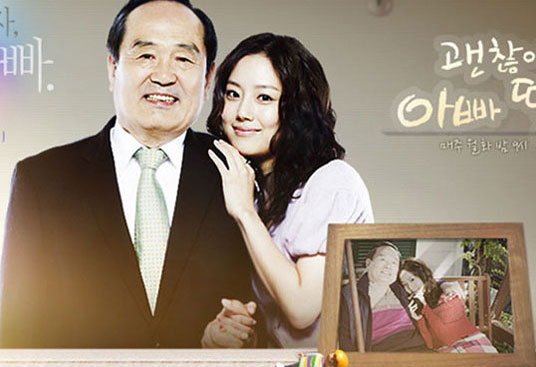 Eun Chae Ryung is a spoiled daughter who had always completely relied on her father. When he is involved in an accident one day, she finds herself rudely awakened from her sheltered life and forced to mature, encountering numerous hardships before she gradually becomes an independent person.

The story of a spoiled girl who stands alone after her father's sudden accident.

Chae-ryeong (Moon Chae-won) a delinquent college student studying abroad begs her father Gi-hwan (Park In-hwan) to buy her a new bag and a cell phone as soon as she returns home on vacation. Gi-hwan's wife Sook-hee (Kim Hye-ok) disregards her husband and focuses only on having her eldest daughter Ae-ryeong (Lee Hee-jin) marry someone rich. Their son Ho-ryeong (Kang Won) has a girlfriend whose parents are obsessed with getting as much financial assistance from Gi-hwan's family as they can. And as if that is not enough, at his workplace, Gi-hwan even tends to the mess made by the younger sibling of Gi-hwan's subordinate who threatens to leak his company's designs. Indeed, in its first episode the drama went to great lengths to show what a devoted and self-sacrificial father Gi-hwan is and how much others count on him. This will serve as the basis to showing how the characters change in the future once Gi-hwan becomes helpless and is the formula to addictive family dramas.

But a typical and easy-to-relate-to story line does not necessarily guarantee it sympathy and understanding from its viewers. Chae-ryeong, the heroine that Moon will play, seems to be a mix of the two main characters from 2009 SBS drama "Shining Inheritance": the bright, innocent girl Goh Eun-seong (Han Hyo-joo) and the arrogant rich boy Sun-woo Hwan (Lee Seung-gi). Other characters in the drama were portrayed as overly materialistic or brazen, as if to increase the burden for Gi-hwan. Jong-seok's (Jeon Tae-soo) weird obsession over Chae-ryeong which then led to an almost-abduction of her did not make much sense except that it was aimed at getting Gi-hwan get involved in the messy situation. Overall, the start to "It's Okay, Daddy's Girl" leaves a lot to be desired for compared to its predecessors "Coffee House" which had a unique story line and "Doctore Champ" that developed its story convincingly. But then again, the real story is yet to begin as this drama is really about how "daddy's little girl" Chae-ryeong matures along with her friends and they have yet to show on screen so we will just have to be a little more patient.