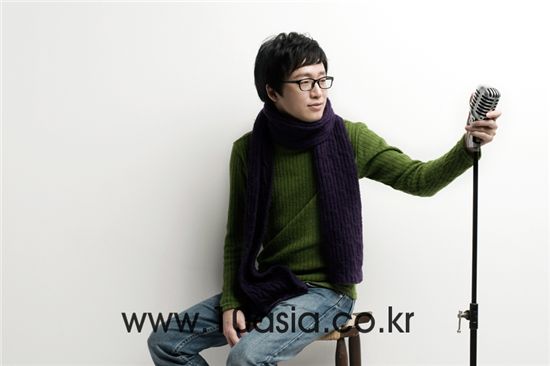 Lucid Fall, who debuted in 1998 as a member of the Korean rock band Mi Sun Ee, took off his solo career in 2001 with a self-titled album. Also a student of engineering in Sweden and Switzerland who used to release an album whenever he visited Korea, gave up on his studies and returned to Korea to unveil his fourth album "Les Miserables" late last year. 10Asia talked to the artist to talk about his music and vision.

10: It has been almost a year since you have returned to Korea in early 2009. How do you feel about contemporary Korea?
Lucid Fall: It may be a sensitive issue but the first thing that came to mind was that it's capitalistic. I'm not trying to talk about ideologies but it seems that they are accept change as something that is very natural. They are trying to turn things from the past and inefficient things to become efficient. Same apartments are being built, others are being torn down and an increasing number of regions are undergoing redevelopment. This doesn't have anything to do with anything that happened in 2009 but when I think about the Sae Man Keum and how they made a tunnel through the Cheonseong Mountain, it just hurts me. I feel the same way towards the 4-river restoration project.

10: So you're saying you are sorry to see societal values being substituted for economic efficiency.
Lucid Fall: It's not just about capitalism but about things disappearing. For example, look at the Kyonghi Palace. Only about 40 percent of the original Kyongbok Palace remains intact but it's zero with Kyonghi Palace. There's really nothing left. And what's ironical is that even before Kyonghi Palace is restored, a high-rise officetel called "The Morning of Kyonghi Palace" was built. Just going to that neighborhood was awful. What I don't understand is, isn't the Gwanghwamun Square a national project as well? If that's so, I wonder what it would have been like if they paved roads underground, made a real square above it and restored what was in the past.

10: This may be out of the blue but how did you feel when Namdaemun was set on fire?
Lucid Fall: To be honest, I didn't feel anything at the time. Since I wasn't in Korea it didn't really hit me. But whenever I pass by the ruins these days, I feel like I'm looking at a patient. A sick patient covered in bandages. It feels like looking at an aspect of contemporary Korea.

10: Regardless of the political ideological talk, you seem to have a sensitivity towards the past.
Lucid Fall: I feel the same way about the old ways, not just antiquities. For example, I have this MD player that I cannot throw away. It was the digital medium in existence when I went to Yongsan in 1999. I bought it on a one-year plan and I would put in all the songs from my CDs because it had good quality too. That's why I don't think I can throw it away. It broke so I went to a store in Yongsan to get it fixed but I never went back to get it. Even when I play games, I play old games like "Romance of the Three Kingdoms." Maybe I'm anti-processive. (laugh) I'm the type that will go with the old way even if there are many ways to do it. I think the reason that instruments made a long time ago are passed down till today too because there is an aspect to them that cannot be replaced by digital instruments.

10: Our conversation naturally shifts to music. After listening to your fourth album, it seems that you are a musician who likes the sound of the acoustic guitar and not doing it for the sake of coming up with simple arrangements.
Lucid Fall: I'm one of those people who are unaware of my personal tastes but I like the acoustic guitar. The instrument itself has this charm to it. That is why I used a contrabass this time. It had been my dream to create every track on the album with analog instruments so I think I used the electric piano just for one song. It's not electronic it's electric. I know we just talked about acoustic guitars but I like the reverberation. Even when I use an electric guitar, I use the one that has a hollow (just like an acoustic) structure. I am greedy when it comes using natural sound.


10: The new album actually sounds more defined with the acoustic guitar and other string instruments featured focusing more on the sound of the instrument itself. Does it come simply from the engineering technique or were you aiming for something in particular?
Lucid Fall: There are musicians who purposely attempt at many things but in my case there are many times when I think, "What will be the result if I did this? Is it better because of it?" What exactly is arrangement. My old idea of arrangement was that every element is recorded down in a medium for use by any musician. But I think my musical output results from coincidence based on intentional ideas.

10: The arrangement of the string instruments stood out in the album.
Lucid Fall: In the case of "Les Miserables Part 1," we thought of adding in a string quartet because we thought we could bring it out more in that way. That's the work I did for it. I asked a string instrument arranger for help and didn't get any other feedback in particular but I liked the results. It was also recorded well.

10: I have a question about the song "Mackerel." Even though it is arranged with string instruments, it sounds minimal rather than more fancy.
Lucid Fall: I couldn't hear my voice through the string instruments. My voice doesn't have that so-called edge to it. It's not well-defined so it's isn't easy to catch. So the key point of mixing my songs is to make my voice be heard better. If I didn't pay attention to that factor, the lyrics wouldn't have been heard. When I decided to use string instruments, someone advised me that my voice would be smothered by it. With the first mixing of "Mackerel," you couldn't hear my voice, so we turned up my voice and lowered the sound of the instruments. By then you could barely hear it.

10: You say you don't have an edge to your voice but I think it's just a style unique within you that rubs off from your music. Although that may be an unintended outcome.
Lucid Fall: I don't really like the sound of my voice. It might have its advantages but it is still a handicap. It's extreme.

10: If you didn't have that handicap would you be more greedy and try some fancy musical experiments?
Lucid Fall: I don't know but I think it will be fun to try. Maybe with a big band. But I'm not greedy about that. I just think it would better if I had edge to my voice. That is what I'm disappointed in. If I really wanted to do something I would find a solution for mixing my voice. That is what I feel most strongly about.

10: Then would you say that the starting point of Lucid Fall is your voice?
Lucid Fall: That is what I'm going for but it's not going so well. I'm not the best singer but in the least there is a range I can pull off. I will feel good about myself and so will the listeners when I sing in my range but I worry that my voice will crack. I think a lot about these things even though I know myself. That is why I come up with songs which will be easy to sing live. So while promoting my third album, I gave a song to Lee Juck. I wondered if I should give "Les Miserables Part 1" to someone else too although I ended up singing it myself.