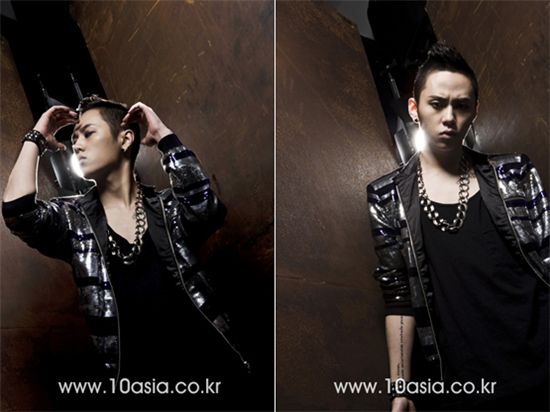 10: Jun-hyung, your hairstyle for song "Shock" was the talk of the town. How did you decide on getting such a haircut?
Jun-hyung: We usually have draft designs laid out for our hairstyles but there hadn't been one set for me even by the time we were supposed to shoot our music video. So everyone on set, including my company people, the members of my group and the hairdressers, all sat me down and said they would just start cutting away bit by bit. They kept going until I had lost all my hair. We were worried that I may look disagreeable but I got a nickname for it and everyone said it was interesting so I'm satisfied with it. More than anything, it's comfortable when I'm sleeping.

10: Your image has become stronger, especially more so since you're the rapper with that haircut now and a tattoo.
Jun-hyung: I don't feel any pressure when my image changes. I actually hadn't been able to show my style while promoting "Bad Girl" or "Mystery." And I had always been wearing sunglasses so I'm glad I didn't have to wear them for this album. As for the tattoo, I didn't get it because I needed it for our concept or fashion, but I had just wanted one for a long time and the president of my company allowed me to.

10: How did the members of your group respond to your new hairstyle
Jun-hyun: They werent' that surprised in particular. Their response was something along the lines of "Doesn't look too bad."
Du-jun: I said I liked it because it looked cool.

10: But do all of you think you could pull off the style?
Du-jun: ... Um, I would if I it would suit me...
Gi-kwang: It's only for those who can actually pull it off.
Yo-seop: I think Jun-hyung would look that best in it. So only for him!

10: You have to rehearse a lot nowadays and also have more individual activities to pursue, so I think you would feel pressure in being the leader of a group where teamwork is crucial, especially to perform the dance moves to a song like "Shock." What are the difficulties you go through, if there are any?
Du-jun: I think I don't really feel much pressure about that because they do well for themselves. I don't really have to mind to them since the rehearse a lot too.

10: Then let me ask you, Dong-woon. You're the youngest of the group -- who is the most and least scariest member?
Dong-woon: I don't think there should be anyone that is scary. We're all members of a single group. There's no pushover either -- they're all just my members and older brother.

10: You all live together. Don't they make you do the chores or anything?
Dong-woon: Well, now they... Oh, I didn't mean that. No, they don't. (laugh)
Hyun-seung: But really, I think our team doesn't have that... We're more easy-going when it comes to ranking. We let him choose as we do and we don't really give him chores to do either.
Jun-hyung: But honestly, very rarely I'll ask... no, not ask just request whether he can get me something. But I don't think I've ever said, "You do this because you're the youngest." Hmm, was there? (laugh) And when we give Dong-woon a choice, most of the time he'll say that he will go with what's left over. 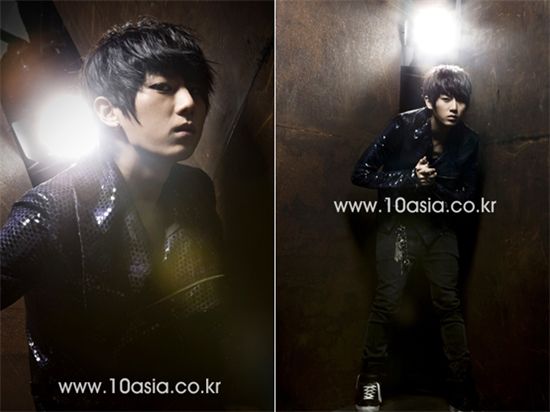 10: All six of you have become adults after Dong-woon's graduation from high school. How much can you all drink?
Yo-seop: None of us really drink that well. We'll have a drink very occasionally, when there's a week where we have no TV appearances. We're all similar when it comes to drinking but I think Du-jun is the worst. His face will turn red even on the first drink so we made fun of him when we first drank. But I'm glad everyone is a bad drinker. If anyone was a good drinker, he would have no fun.

10: On MTV's B2st which you shot ahead of your debut, I saw that the rest of the group put on a surprise birthday party for Hyun-seung. What did you do for Gi-kwang's birthday?
Gi-kwang: They put on a surprise party for me. Although I didn't fall for it. (laugh)
Du-jun: We just ordered chicken and ate it with cake at our place.

10: Yo-seop, I understand you graduated from the same high school as Gi-kwang. How and when did you first meet?
Gi-kwang: Um, we first met at JYP. I think we were in 10th grade. Dong-woon was there first, then I joined after passing their audition and then Yo-seop joined so there was a time we were all trainees there together. Then Yo-seop moved agencies and I left for Cube too where I was the only trainee. My company then asked if I could recommend anyone so I told them about Yo-seop and he joined our agency after passing our audition. We actually went to Ahyun High School together too for about a year. So we're just destined to be...
Yo-seop: A tenacious relationship!
Dong-woon: I wouldn't be surprised it you were sick of each other!

10: Gi-kwang, are you still watching what you eat these days?
Hyun-seung: He always does. He just ate a bit more than he usually does today.
Gi-kwang: I had lost too much weight recently so I'm actually trying to gain more weight so that I can beef up.

10: How do you all handle all that sort of stress -- from your tightly-packed schedule and having to watch what you eat.
Gi-kwang: I wasn't allowed to have a cellphone while pursuing my solo career as AJ but we can have after winning first place. (laugh) It was actually very uncomfortable not having a phone in the first month or so but you get used to it.
Jun-hyung: And once you actually have one, you sometimes wish you didn't have one. (laugh)
Dong-woon: To relieve stress, there's a gym in the third floor of our building so I'll play table tennis or...
Jun-hyung: You may think we probably do something quite fun but there really isn't much to it.
Dong-woon: Halli Galli, Halli Galli!
Yo-seop: We even only have one video game -- soccer. And then a couple board games. So we'll just talk and play board games.