I Hate You, But It's Fine 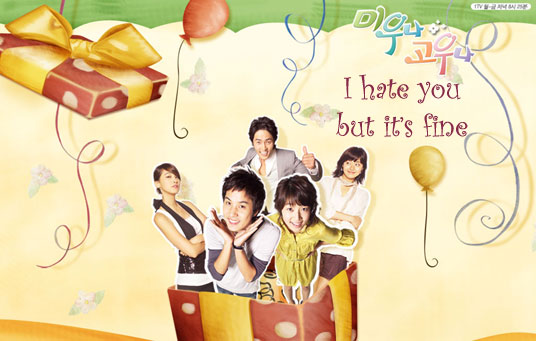 Also known as Likeable or not

This drama is a story about love, family, and the realism of people's dreams! Each character will experience their joy, frustration, and pain at times as they live out their daily lives. Na Dan Poong is a company marketing team leader. Jang Hyun Woo is a plastic surgeon and Baek Ho's friend. Sun Jae is good looking, smart, and makes very good decisions. He has a girlfriend, Ji Young, who he met while they were in college. But to farther his ambitions, he breaks up with Ji Young to marry Bong Soo Ah whose father is the owner of Bonjour Foods.
Baekho and Danpung

Baekho and Danpung first meet during Danpung company food testing at a mart. They continue to run into each other in various farcical situations. Baekho eventually starts working in the marketing department of Bonjour Foods, where Danpung is his superior. At first, she is exasperated by his inexperience, but is eventually impressed by his work ethic and innovative ideas.

Baekho falls in love with Danpung, but is afraid to tell her because Danpung is dating his high school classmate, Hyun-woo. Hyun-woo is a doctor from a wealthy family, and is therefore a very eligible bachelor. However , Dan Pung realises that she doesn't love Hyun-woo. Hyun-woo decides to leave to America so that DanPung can search for her own happiness. Sometime after, Danpung realizes she loves Baekho.

Baekho and Danpung want to get married, but must first endure the fierce opposition of her mother and brother. Danpung's mother eventually relents after Danpung protests by starving herself. Once married, they are a very happy couple. About two years after their wedding, Danpung becomes pregnant.

Seonjae and Ji-Yeong have been dating for about 8 years. Ji-Yeong was a loyal girlfriend, and stood by Seonjae throughout college, his study abroad and army service. They are in love and plan to get married.

Sua meets Seonjae and becomes infatuated with him. She chases him relentlessly, ignoring the fact that he already has a fiancee. Helping Sua is her grandmother, who wants to give Sua everything she wants, and Seonjae's mother, who craves wealth and power for her son. Eventually, Seonjae is swayed, and cruelly dumps Ji-Yeong to marry Sua.

Seonjae and Sua's marriage is not happy, because Sua is selfish and spoiled. She is also very jealous that Seonjae may still have feelings for Ji-Yeong. Seonjae does in fact have feelings for Ji-Yeong, especially because Sua is selfish, and Ji-Yeong was a sweet and kind person. Although they do not have an affair, Seonjae continues to go see Ji-Yeong whenever he is stressed. He even asks Ji-Yeong if she would get back together with him, and even gives help to Ji-Yeong's family when they have financial troubles without being asked.

After marrying Sua, Seonjae is given a very high position in Bonjour Foods. While working there, he acts very arrogant and above the law. He eventually creates a slush fund, and bribes a government official. When Mansu finds out of this, he suffers a brain hemorrhage, and goes into a coma. During Mansu's coma, Seonjae is promoted to Bonjour's president. But Mansu eventually wakes from his coma and fires Seonjae. The police have also begun to investigate Seonjae's crimes. Due to this scrutiny, Seonjae's father resigns from his position in the government. After seeing his father sacrifice himself for him, Seonjae finally repents for his misdeeds. He divorces Sua to spare her the burden, and turns himself in to the police. Sua goes to Paris to forget about Seonjae.

After serving time, Seonjae begins to work at an organic farm, and enjoys his modest and hardworking life. Sua returns from Paris, and they get back together.

After being dumped by Seonjae, Ji-Young is devastated and takes a long time getting over Seonjae. She reconnects with an old classmate, Ujin, who had a crush on her in the past, but gave her up because she already had a boyfriend. After tentatively dating Ujin for a while, she eventually decides to marry him. At the end of the series, they are a happy couple.

Mansu and Dongji were young and in love, but broke up because Mansu's mother, Mrs. Choi opposed the marriage. Mansu married another woman, and then became widowed. Later on, they reconnected, and marry again. Mansu's mother still opposes this marriage, but finally relents. After the marriage, she continues to treat Dongji badly, and also her son, Baekho.

Dongji suffers under Mrs. Choi's abuse for a long time, but Mrs. Choi eventually sees that Dongji is a good person, and accepts both her and Baekho as members of the family. At the end of the series, Baekho is revealed to be the biological son of Mansu. It is never revealed why Dongji never told this to anyone, or whether she knew it herself. In the final episode, we learn that Dongji is pregnant.

I Hate You, But It's Fine trailer