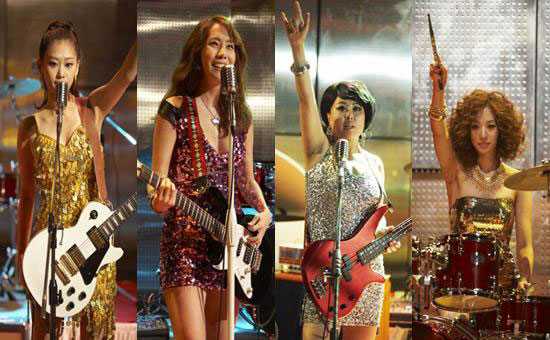 Korea's women get together and form a legendary band. A drama that shows the growth of women who comfort their pain with music and find their identity.

First there were the live performances, then the possibility of a musical adaptation. Now the band within SBS drama "I Am Legend", called the Comeback Madonna Band, will be releasing a real full album and perform on live stages.

The band members and actresses are: Kim Jeong-eun on vocals and guitar, Hong Ji-min on bass, Hyeon Junie on guitar, and Jang Shin-young on drums. I can actually see this working, because all of the band members play their own instruments, and most have prior performance experience. Both Hyeon Junie and Hong Ji-min had professional music experience prior to television acting - Hyeon Junie in a rock band, and Hong in musicals - while Kim has performed a few times on her music/talk show Chocolate.

As mentioned previously, music director Lee Jae-hak has been leading the band members in rehearsals, and the foursome have recorded thirteen songs. We've heard a number of them in the drama, but I expect more to come in coming episodes. The album will be released before the drama goes off the air and features rocked-up remakes of old pop hits, as well as a couple originals ("Comeback Madonna" and "You").

A source with the production team said that the four ladies have developed a deep rapport and are planning to perform at live concerts after the drama's end. There are also plans for appearances on television music programs. The album will have the added function of being their guide in mapping out the proposed musical production, which may or may not use the same actors. That decision has not yet been made.

Already songs from the soundtrack are proving to be a hit; the drama versions of "A Million Roses" and "Love Love Love" have performed very well on online music charts, making it to No. 1 on portal site Daum's music chart rankings on the 23rd.