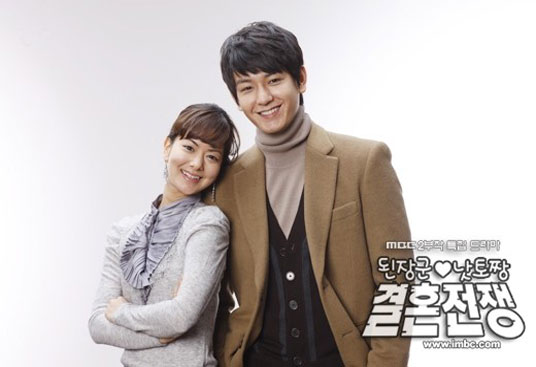 Hyunhaetan Marriage War is co-production between South Korea and Japan.

Dae-cheon and Takako are lovers who decide to get married.

However, Dae-cheon's father, who is a fishing boat captain, dislikes the Japanese while Takako's father has an unfavorable opinion of Korea. So Dae-cheon teaches Takako how to talk in a heavy, folksy Korean accent and tells her to limit what she says to his father to only four words. He then introduces Takako to his father under the name "Choi Do-ja", which is a girl's name in Korea.

Thinking that Takako is Korean, his father approves of their marriage. But later on, Dae-cheon's father learns that Takako is Japanese and becomes infuriated...

He is as researcher at a university. He used to be a male chauvinist but after he started dating Takako, he became a thoughtful and caring person. He endures the cold treatment from Takako's family who do not like Koreans but he finally gets their approval to marry her.

Dae-cheon's girlfriend. She used to be submissive and shy but after she met Dae-cheon, she changed dramatically. She takes on Dae-cheon's three tough sisters who don't think she's a suitable wife for their brother.