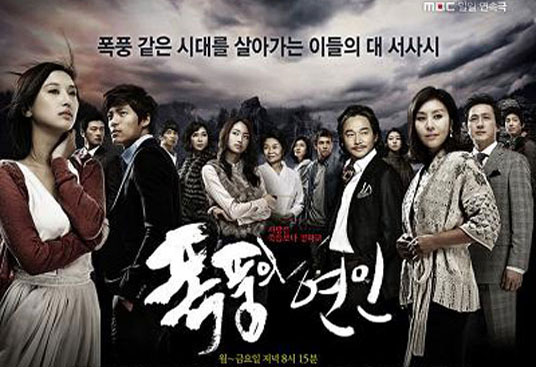 Also known as: Love is Stronger Than Death

Shin Eun Hye is disabled, but her beautiful heart and permanently sunny personality earned her the fond description of being a 'happy virus.' She dreams of studying in Seoul, and with the help of Madam Min Hye Sung, the head of Sorabol Hotel, Eun Hye becomes her grandson Philip's tutor and was able to read many books in the rich old ladys library. She later falls in love with Min Hye Sung's ambitious oldest grandson, Lee Hyung Chul, and begins a trial of love and hardships that she must face on her way towards achieving both physical and spiritual healing.

All the dramas which were produced by 'Lim Ha-ra' PD become cultural bombs; he is also a famed playboy. But he changes when he met this older girl named, 'Lee Tae-hee'.

'Hurricane Couple' is about hard times of Byeol-nyeo, who has ian nnocent soul, living in Seoul with people who didn't forget the valuable things in life.

This is the collaboration of the writer of 'East of Eden', Nah Yeon-sook and Ko Dong-seon PD from 'My Wife is a Superwoman'. The episode, which went on air on the 17th, introduced each characters played by Kim Min-ja, Jeong Bo-seok, Choi Myeong-gil, Son Chang-min, Shim Hye-jin, Jeong Chan, Kim Won-jun, Choi Won-yeong, and Hwan-hee.