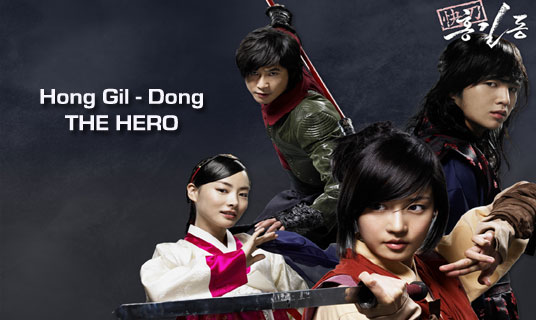 'Hong Gil-dong, the Hero' is a comical historical drama that differs from typical hero stories with supernatural powers. It focuses more on human perspective. The main characters are those of modern times and the story is youthful and bright.

Hong Gil-dong (Kang Ji-hwan) was born as an illegitimate child of Minister Hong. As the family continues to ignore him through years, he gives up on a social career and lives a life of mischief. Although his martial art skills are formidable, he spends most of his time with the dancers and women in town, making him nothing more than a neighborhood thug.

But when he ran across Lee Nok (Sung Yu-ri) and Lee Chang-hwi (Chang Gun-suk), his life of pleasure suddenly changes into the life of a 'Robin Hood' . His comrade Lee Nok lives the life as a wanderer in the streets, but actually is the only daughter of a wealthy nobleman. Her rough and boyish personality begins to change as she falls in love with her friend, Hong Gil-dong. However, she runs into a dilemma when she comes to learn that Hong Gil-dong's father had something to do with her father's death.

Lee Chang-hwi is in fact a prince. When his step-brother received the throne, he barely escaped from death and met a group of thieves, later to become their leader. Now he is hiding his identity and acting as the robbers of justice. He robs the corrupted rich and then gives those goods to the poor. Hiding his inner pain, Lee Chang-hwi was out to make a revenge on the evil and corrupt officials with his sword. He came across Lee Nok and Hong Gil-dong and became comrades. As time goes by, Lee Chang-hwi falls in love with Lee Nok. But when he comes to learn that she loves Hong Gil-dong, he falls into despair and betrays him.

In this triangle of love and fate, what decisions will the three make? Will Hong Gil-dong choose his girl Lee Nok or his friend Lee Chang-hwi? And what will be ahead of Lee Chang-hwi as he betrays his friend out of jealousy?