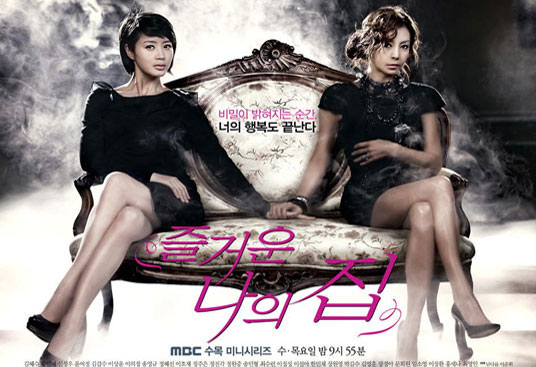 Also known as: My Sweet Home

A melodrama with suspense. Two friends who went to the same girl's high school find their lives intertwined in so many ways due to their colliding ambitions. In "Home of Joy" a married couple who have reached their 10th wedding anniversary find themselves locked in a battle that is similar to the tensions in the Hollywood movie, "War of the Roses." Finding it unbearable to deal with the irreconcilable differences that she has with her husband, she wishes that her husband would just drop dead. During their frequent fights, they learn an invaluable lesson about life and marriage. So the story in "Home of Joy" tries to show how marriages work when two partners work together and the institution of marriage itself is not a reservoir of instant happiness as people think a marriage should be so.

Kim Jin-seo (Actress Kim Hye-soo, 38) - Psychiatrist With beauty and brains, she is a perfect woman who also has a compassionate heart. But there is one person in her life that she can never forgive. That person is her hometown friend Yoon-hee... Yoon-hee refers a 21-year-old female college student to Jin-seo as one of her first patients when she opens her own practice. But the college student turns out to be grappling with problems while carrying an affair with a married man. Yoon-hee knew all along that the student was the young mistress of Jin-seo's husband so why on earth would she steer the patient to Jin-seo? What was she thinking?

Mo Yoon-hee (Actress Hwang Sin-hye, 38) - Curator of an Art Gallery, Wife of the Board Director of Myungsung University She is sexy, impulsive and a drama queen. She is well aware of her sexuality and how attractive she is. She always envied Jin-seo who had terrific parents that provided her with a comfortable life. So even when she was Jin-seo's best friend, she hated her at the same time... Jin-seo stole the first boy that Yoon-hee ever loved. And she did it in a cruel way...

Lee Sang-hyun (Actor Sin Seong-woo, 40) - Jin-seo's husband, College lecturer at Myungsung University He is a gentle person who has a big heart. He felt compassion for Yoon-hee when they were both young kids. Unaware that Yoon-hee had a crush on him, he fell in love with Jin-seo and they got married. But having a doctor wife who is the breadwinner in the house undermines his masculinity. Finding this unbearable, he has an affair with a young female student of his who looks up to him as being more mature and wiser.

Kang Shin-woo (Actor Lee Sang-yoon, 29) - Detective He is a tough detective who has a short temper. He gives in to Jin-seo's demands to reopen an investigation of a deadly accident without informing the family members. As a hard-charging detective, he becomes fixated with the case even more so than Jin-seo as he searches for the truth.

Sung Eun-pil (Actor Kim Kap-soo, 49) - Yoon-hee's husband, Board Director of Myungsung University He is a serene romanticist who is well-mannered like an upright British gentleman. Behind his impeccable manners, cultured ways and devotion to his religion, he can become a very violent and cruel person.