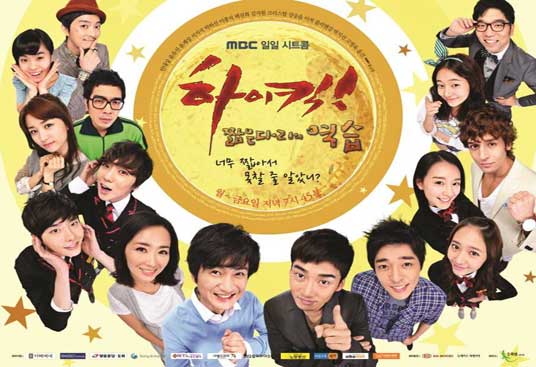 Also known as: The Short Legs Strike Back

It is told from Lee Jucks viewpoint as a series of flashbacks. It is 2041 and Lee Juck has released a best selling book called "High Kick: Revenge of the Short-legged". The book revolves around the story of how he met his wife and the various characters in her life.

The drama begins when Nae Sang's business partner, who has embezzled funds from the company, flees the country and leaves behind a mountain of debts and a horde of angry creditors. Faced with the prospect of going to debtors' prison, Nae Sang frantically collects his family ( his wife in the middle of a massage session, his son during an ice hockey match and his daughter who had arrived from LA) and takes off for the countryside.

Rendered both bankrupt and homeless, the family has no place to stay for the night after Nae Sang's plans to live with his great uncle fall through (the old man has passed away and sold his house). In desperation, they call Yoo Sun's younger brother, Kye Sang. he decides that the family should move into the house which he shares with Ji Seok, Yoo Sun's other younger brother.

And thus their stories begin...


Nae Sang was the former President of the Ahn Company, which ran into financial difficulties. He is on the run from the company's creditors. He tends to be calculative and quarrels often with his wife, although they enjoy a good relationship.

Ahn Nae Sang's Wife. She developed menopause from the stress of losing their home. She is reasonable and seldom gets angry, unless provoked (usually by Nae Sang). She is a strong, resilient character.

Yoo Sun's Younger Brother. He works as a doctor in the public service. He is idealistic and kind, but sometimes obtuse about other people's feelings. He wears a perpetual smile on his face.

Younger Brother of Yoo Sun and Kye Sang. He is a gym teacher at the high school which Jongseok and Soo Jung attend. He can be impulsive, but is generally straightforward and honest when expressing his emotions.

Son of Ahn Nae Sang and Yoon Yoo Sun. He is a rebellious student who is still adjusting to life as a normal high school student after being in a sports school. He has an antagonistic relationship with his sister and is particularly bad at being "cute".

Daughter of Ahn Nae Sang and Yoon Yoo Sun. Jong Seok's Younger Sister. She studied in Los Angeles but had to stop due to the family's financial circumstances. She can come across as superficial and selfish but is also capable of showing care and concern to people she loves, especially her dad.

She is a Korean Language Teacher at the same high school as Ji Seok. She is kind and approachable, but can be gullible and is easily forced into situations in which she is an unwilling participant.

Ha Sun's cousin. Both street-smart and book-smart, she is also sensitive to other people's feelings, and will find ways to cheer them up. However she can be stubborn about certain things, most notably, her scooter-riding. She is fond of Kye Sang and Jong Seok. She owns the house which Ha Sun, Jin Hee and Julien live in.

Ha Sun's Younger Alumna. She often has to scrimp and save because she is in debt, but has recently managed to find work as a nurse.

He is an English Language Teacher at the same high school. He was forced to move into the house when Ha Sun lost the money meant for his housing. He loves Korean food and excels in making Korean food as well. He is easy-going and patient, and is 'best friends' with Nae Sang.

English Language Teacher of Highschool. She is rather prickly, and bullies Ha-sun. She stumbled upon the fact that Ha-sun and Julien are living together.

Music Teacher of Highschool. He appears to be an introvert, and seldom speaks. His favorite spot is hiding behind the curtains in the teachers' room.

Vice Prinicpal of Highschool. His personality is similar from the ones from the two previous High Kicks.